1522
Hernán Cortés establishes the Spanish government of the new colony in the Coyoacán territory.

1524
In distributing farmland to his veterans, Cortés is said to have established the old Pueblo of San Cosme along the Causeway to Tacuba. The current church of Saints Cosme and Damian dates from 1672.

In the same year, Cortés participated in the founding of the Church Hospital de Jesus Nazareño, although the oldest parts of the current structure, the twin courtyards and the imposing staircase, date to the 1580s. The bell tower was completed in 1704.

1529
Construction begins on the San Pedro Apóstol church in San Pedro Tláhuac over what had been a ceremonial center prior to the conquest.

1531
San Juan Diego sees the Virgin of Guadalupe on the Cerro de Tepeyac. The first of four apparitions occurred on December 9. In the same year, the final pilgrimages in honor of the mother goddess, Tonantzin, are made to the same site. The Spanish are believed to have already built a shrine dedicated to the Virgin Mary at Tepeyac by the mid 1520s.

1534
Hernan Cortés, to secure passage to the Toluca valley in the west, renames San Pedro Cuauhximalpa, and establishes the towns of San Lorenzo Acopilco, San Mateo Tlaltenango, and San Pablo Chimalpa, all in today’s Cuajimalpa.

1535
The Colony of New Spain is officially established. Mexico City, the Capital of New Spain, and therefore unofficially the capital of the Spanish Empire would within 100 years emerge as the most cosmopolitan, multicultural, and international of cities anywhere in the world of that time. It would remain so until Mexican Independence was achieved in 1821.

1542
The New Laws, ie; the New Laws of the Indies for the Good Treatment and Preservation of the Indians, forbade the enslavement or forced labor of indigenous people.

1550
The first Viceroy, Antonio de Mendoza, grants official permission to the Xochimilca people to begin construction of their tianguis. It’s a marketplace that survives to this day in the Mercado de Xochimilco.

1551
The second Viceroy, Luís de Velasco (1511-1564) inaugurates the Royal and Pontifical University of Mexico. The first university in North America, it was renamed the University of Mexico only after Mexican independence. Today, parts of the original building are home to UNAM’s Museo HOY.

1552
An agreement was reached whereby the cost of a new Metropolitan Cathedral would be shared by the Spanish Crown, the conquerors, and the indigenous peoples under the direct authority of the Archbishop of New Spain. 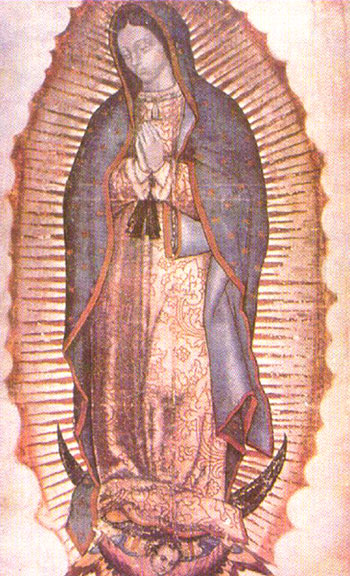 1556
Marcos Cipac de Aquino is believed to have painted the most famous painting in Mexican history. Ultraviolet light testing confirms the date to the year, and reveals what is believed to be his signature, which reads “M.A.”

1559
Phillip II grants the title of “city” to Xochimilco.

1566
The son of Hernan Cortés, Martín Cortés Zúñiga, is active within a conspiracy to liberate the territory of the new Viceroyalty of New Spain from Spanish domination. Denounced by Baltazar de Aguilar y Cervantes, the threat resulted in the arrival of the Spanish Inquisition in the colonies where it established a court and justice system. The Inquisition occupied the Palace of the Inquisition from 1736 until 1821.

1573
Construction concludes on the Temple to Saint Gabriel the Archangel, outside of Metro Tacuba today.

1573 – 1813
Work begins on the Metropolitan Cathedral of Mexico City to replace a smaller church built on the same site over the Templo Mayor. Construction continues for another 240 years.

1580
The Hacienda de San Nicolás Buenavista was claimed by Pedro Ortiz de Valdivia in what are today parts of Iztapalapa and Tlahuac. The enormous estate denied the indigenous residents of the area access to the land they’d been farming for generations and led to controversy, civil disobedience, and open conflict.

1583
The Colegio de San Ildefonso results from the consolidation of the Colegio Máximo de San Pedro & San Pablo and its seminary with three other Jesuit seminaries. The building presently bearing the same name was begun somewhat later and was expanded numerous times over the coming centuries.

1580
The Dominican-founded hermitage of San Jacinto is elevated to the status of Church. The resulting Church of San Jacinto, in San Ángel, is still one of the oldest in the city.

1590
A well-regarded embroiderer named Amaya set up shop at the corner of today’s República de Chile and Mariana Rodríguez del Toro de Lazarín streets. That tradition of dress-making in La Lagunilla has carried on to the present day.

An Italian military engineer, Juan Bautista Antonelli, finally drew up plans for a first passable road from Mexico City to Veracruz, via Orizaba. This was under orders from Viceroy Luis de Velasco and in response to a Royal Decree calling for Royal Roads in New Spain of October 17 of 1533. The date has been celebrated as Roadworkers Day (Día del Caminero) across Mexico since 1925.

1606
On January 23, the first stone was laid at the convent of “Desierto de Nuestra Señora del Carmen de los Montes de Santa Fe.” An enormous complex that lasted some 200 years as a monastery, over time it came to be known as Desierto de los Leones.

1610
The Church of Santiago de Tlatelolco is completed on what is today Plaza de las tres culturas in Tlatelolco.

1628
Construction of the parish church of San Pedro Apóstol in Cuajimalpa was begun. The building would not be finished until 1925.

1629
On September 21, a great flood followed 36 hours of rain. The flood called “La Noche de San Mateo” inundates most of the city, and keeps it covered, and mostly empty of people for some five years. The flood explains the almost total lack of 16th-century buildings in the City Center.  The carved head of a lion at the corner of today’s calles Madero and Motolinía is said to mark the highwater mark.

1685
The Techialoyan Codex of Cuajimalpa was created between 1685 and 1703. The document was intended to record the histories of the indigenous community such that they could make legal land claims in Cuajimalpa. Today in the Mexican Federal Archive, it was named part of the Memory of the World by UNESCO in 1997.

1687
The Jesuits found the Hospital del Divino Salvador, a first hospital specifically for women’s mental health in the Americas. The building, on today’s Calle de Donceles, was finished in 1700. It was to serve as a women’s hospital until well into the 20th century.

1692
A riot breaks out, and is captured vividly in a writing called the Letter of Don Carlos de Sigüenza y Góngora to Admiral Pez Recounting the incidents of the Corn Riot in Mexico City, June 8, 1692. Other very important documents were preserved by Don Carlos himself when the Viceroyal Palace began to burn. These are preserved in the Historical Archive of Mexico City.

Ca. 1700
With the founding of the church of San Pablo Chimalpa, (in today’s Cuajimalpa) the last of dissident Mexica people are thought to have been routed from caves in the Espinazo del Diablo area of the surrounding hills. They’d taken refuge there since the fall of Tenochtitlan in 1521.

1703
The El Parían market was an early attempt to get vendors out of the Zócalo. With not complete success, the centralized public market building served as Mexico City’s first such market until the building was demolished in 1843.

1730
Viceroy Juan de Acuña y Bejarano directed that all silversmiths in the city be moved to the Calle de San Francisco. Hereafter, it was called Calle de Plateros until after the Mexican Revolution when the name was changed again to Avenida Francisco I. Madero.

1732
Construction begins on the Palace of the Inquisition. Finished in 1736, the magnificent building had rooms for hearings, trials, secret chambers, a prison complex and accommodations for two inquisitors. Abandoned with Mexican Independence (in 1821), it was sold to the National School of Medicine in 1854.

1734
On 31 July, the first stone was laid for the newly founded Colegio de San Ignacio de Loyola Vizcaínas. The building has been used as a school ever since.

1737
An epidemic remembered as the “Matlazáhuatl Epidemic” could only be named with the Nahuatl word for “red rash.” It killed a significant part of the population of the city before abating in 1739. Even today pathologists can only say that it may have been typhoid, bubonic plague, or a form of hepatitis.

1759
Production begins at the Loreto grain mill, and continues, later as a paper mill, until 1991. Today, it’s the site of the Plaza Loreto shopping center.

1766
The famous Baroque garden at Pensil Mexicano was at least partly opened with an area of some 11,000 square meters. Part of a group of tívolis along the Tacuba causeway, it was declared a historical monument in 1932, but soon after was abandoned. Some 3,000 square meters remain today.  The garden’s elaboration is thought to have occurred under the Viceroy Bernardo de Gálvez who maintained a country home there. (See 1785 below.)

1767
The Jesuits are expelled from New Spain, and most of their extensive properties and institutions are taken over by Franciscan and Augustinian orders. The Jesuits would return only in 1816, and few of their previous holdings were reclaimed.

1768
A major earthquake killed hundreds of city residents. The atrium of the Church of Santa Veracruz, only then being rebuilt, was used to provide a mass funeral for no fewer than 488 of the victims.

1769
Construction begins on the Palace of the Counts of San Mateo de Valparaiso. The building is finished in 1772, and can be seen, largely in its original state at the corner of Isabel la Católica and Venustiano Carranza in the city center.

1777
Rehabilitation work begins on a dilapidated older structure, and probably included the discovery of an Aztec serpent’s head carving. The ancient head was incorporated as a cornerstone into the newer palace of the Count of Santiago de Calimaya. Today, the serpent’s head serves as a cornerstone of the Museum of the City of Mexico to which the building was converted in 1964, having been purchased from the descendants of the Count of Santiago de Calimaya in 1960.

1785
Construction begins on a stately home for Viceroy Bernardo de Gálvez, for whom Galveston Texas was named, on the highest hill in Chapultepec. The building later came to be known as the Chapultepec Castle.

1790
The Aztec Sun Stone is retrieved from the ground at the foot of the Metropolitan Cathedral. Today it’s likely the most important work in the collection of the National Museum of Anthropology.

1796 – 1803
Manuel Tolsá casts the 26-ton El Caballito, his depiction of Charles IV of Spain. Today, the statue is outside the National Museum of Art on Calle Tacuba in the city center, in the plaza later renamed for Tolsá. The statue remains the second-largest cast bronze statue in the world.

1799
The Viceroy Miguel José de Azanza orders 13 young men arrested in Mexico City during the Conspiracy of the Machetes. Accused of planning an assault on the palace and taking the viceroy prisoner, their conspiracy illustrates the growing tension between criollos and the Spanish ruling class.

1810
Alexander von Humboldt, the Prussian naturalist, explorer, and geographer is said to have broadly popularized the use of the highly problematic modern term “Aztec.” He used the word in reference to the many peoples linked by trade, custom, religion, and language and who trace their origins to Aztlán, including the Mexica and the Triple Alliance, but also their sworn enemies, the Tepenec peoples of Azcapotzalco. The word occurs in multiple other sources from as early as the 16th century.