The simplest and most direct route, in a dedicated lane.

Metrobús is the Mexico City Bus Rapid Transit system that has drastically reduced traffic and pollution in the city over the past 15 years. Primarily big red, and often articulated double buses, you’ll see them rolling down the middle of some avenues – and often when all other traffic is at a standstill.

Currently the system operates seven lines, each of which connect with the Metro. 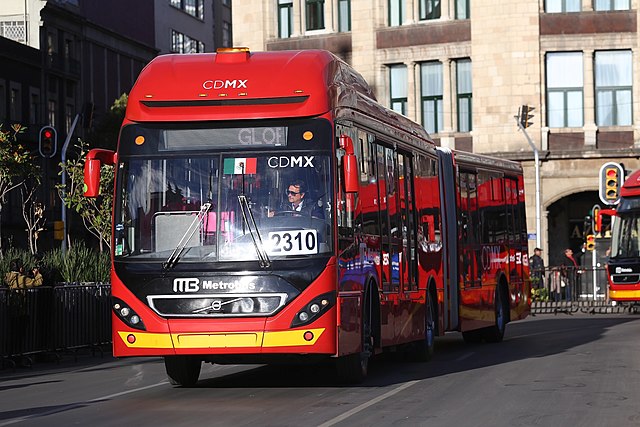 You can use the same prepaid Metro Card used for the Metro to board any Metrobús line. Metrobús is simple, and it’s very often the fastest way to get from one point to another.

Although it can get just as crowded at peak times, unlike the Metro, you must use Metro or Metrobús prepaid card to get onto the boarding platforms at most stations. Some buses (the Reforma and Airport/Line 4 buses) will let you board, but you need to swipe the card on the bus.

Passengers can board outside of entrance 7 at Airport Terminal 1 or outside entrance 2 at Terminal 2.

The bus arrives San Lázaro station where passengers can switch to the Metro or take intercity buses to other cities from the TAPO bus station.

From San Lazaro, passengers can also continue on Metrobús Line 4, through the city center  to the Buenavista station. Here metro lines 1 and 3 and Suburban Trains (Tren Suburbano) run regularly to and from the city center. The service runs every day, 365 days a year. Buses have reserved spaces for wheelchairs, luggage and security cameras.