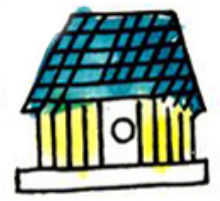 Today's Barrio San Juan Moyotlan was one of the four original neighborhoods of Mexico-Tenochtitlan. Moytla, the place of mosquitos was a neighborhood of working class people and families. Some scholars will claim it was the most important and populous part of the island capital.

Today, Moyotlan is a neighborhood in continuous change and movement. It's referred to in equal measure as "San Juan," "Centro Alameda" or as simply the West Side of the Centro Histórico. And obviously, walks here can take in much of the Alameda Central area, Eje Central, and points to the east in the Centro Histórico proper.

As it's a very popular place for international visitors, the Barrio San Juan Moyotlan is always an important, easy place to explore. Below are just some of the most apparent places to see and learn about. Of course there are dozens of restaurants, hotels, hole-in-the-wall bars and cantinas to check out on your way to all that is.