San Rafael is often lumped in as an "in-between" neighborhood, couched as it is between Santa Maria La Ribera to the north, and Cuauhtemoc to the south. In fact, it's another great walking neighborhood.

San Rafael, like a lot of surrounding communities, was lake bottom until well after the arrival of Europeans. As such, it made fertile farmland for most of the colonial period. It likely included some or parts of the pleasure farms, Tivolis, that lined the old Mexico-Tacuba Causeway to the neighborhood's north.

Only in 1859 was a neighborhood called "Arquitectos" laid out here. Most of the neighborhood we see today was plotted as an extension of Arquitectos by the end of that century.

Early in the 20th century, it was well established with Porfiriato-era townhomes. And as eclectic as many of these were, the neighborhood became eclectic too as Arte Deco and Modernist homes continued to be built over the next 50 years.

The neighborhood offers a wealth of history, a famous market at the top, and it's turned into one of Mexico City's most important Theater Districts. 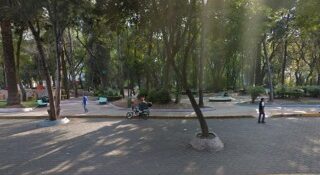