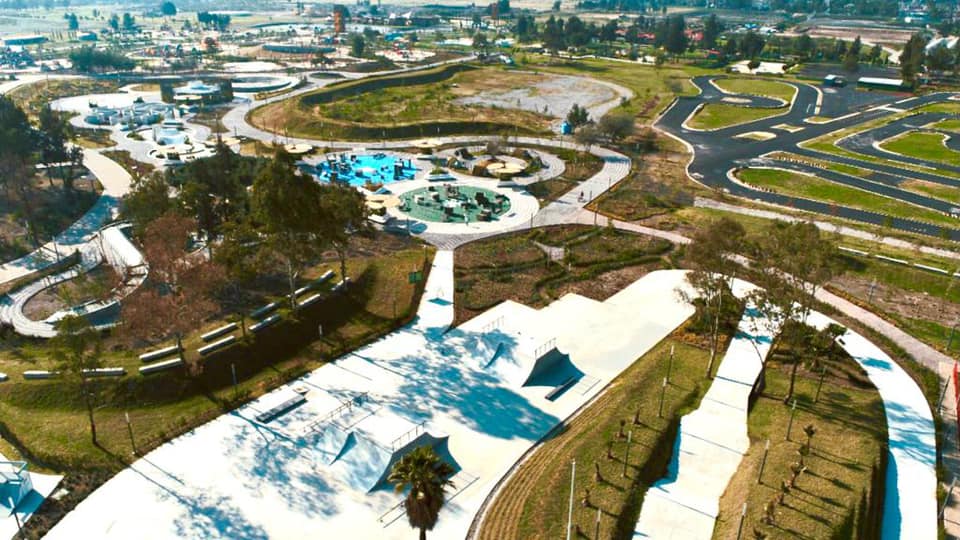 The massive Parque Cuitláhuac is today the second biggest park in the City. At ​​145 hectares, it’s also an enormous ecological and environmental experiment. Officially known as the Parque Ecologico Cuitláhuac, it’s a sustainable project in Iztapalapa and easily one of the best parks in the city.

The project is being carried out in three stages. The first included a massive water park, with a play area for kids, go-karts, an artificial lake, a sculptural space and the biggest skateboard park in the country.

The new park also covers the former Parque Recreativo Santa Cruz Meyehualco. One of the most curious parts of the plan is that much of the new park covers an old landfill. The new park is being built on top of PET bottles. There’s also a layer of rubble recovered from buildings damaged in the 2017 earthquake. The current park is even collecting plastics to be re-used in making the benches, lampposts, and even the parks internal roads.

Reforestation includes 44,000 species of plants, including the mass planting of casuarina and eucalyptus trees. The ecological park also includes a treatment plant for sewage and a giant rainwater collection system that will water the entire park for its lifetime.

For international visitors, the Parque Cuitláhuac is an eye-opening experience. It’s an exemplary project in sustainability and in urban recovery. It may just be the Mexico City park of the future. The park is a few minutes walk north of Metro Constitución de 1917. It’s also just north of Santa Cruz Meyehualco, one of Iztapalapa’s 15 original settlements.