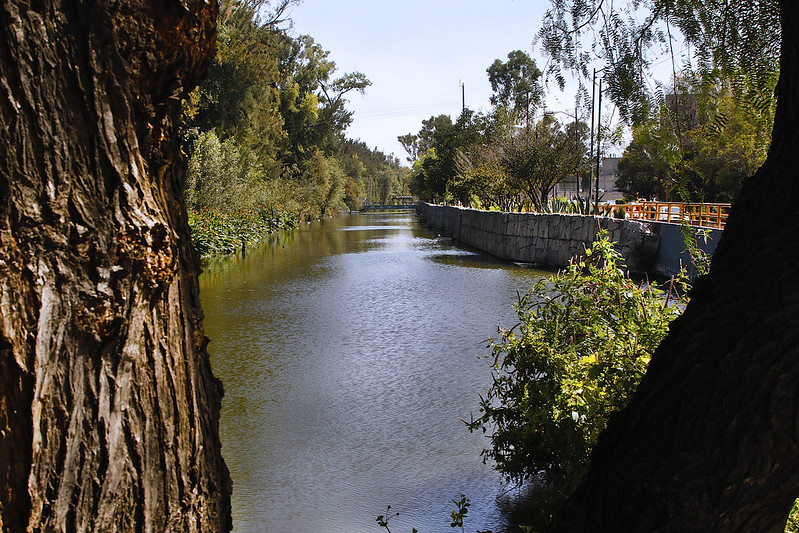 The old canal originated in ancient times when it was called the Huey Apantli. Today, its 12 kilometers extend north from the Xochimilco Ecological Park. Through much of the colonial period this would have connected to the Acequia Real in the Centro Histórico. In the other direction, it connected all the way southeast to Chalco in the State of Mexico.

The name Canal Nacional came about in 1856 when a businessman named Mariano Ayllón began promoting a steamship line running on the canal. The 20th century saw much of the canal lost. Only in 2020 was the remaining stretch of the canal rehabilitated.

The most recent rehabilitation of the park relied on entirely sustainable technologies. Canal banks today grow with aquatic plant species and most of both sides of the canal are now complete with walking paths, bike lanes, and jogging trails. 169,000 plants and trees made up a reforestation project along most of the length of the park. No fewer than 11 children’s play areas complement nine outdoor gyms and workout areas.

The Canal Nacional is today an integrated, and integrating, part of the city scape. The park borders about 10 neighborhoods in Coyoacán and another eight in Iztapalapa. We put the entire area into its own mapped page so you can see more of it. The park is accessible from multiple Metro stations and other public transit lines.

One of Azcapotzalco's most beautiful parks, this one is older than it looks, and a treasure in the city's northeast

Azcapotzalco's giant park is a meeting place for the entire community.

Once the parish church for the old town of Azcapotzalco, it was also, importantly the site of the final battle of the Independence War.