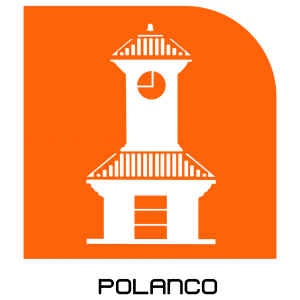 Metro Polanco is named for the entire enormous neighborhood of Polanco. It’s among the most famous neighborhoods in Mexico City. It’s also home to much that’s of interest to international visitors. The Metro arrives to one of Polanco’s primary shopping districts, at the intersection of Avenida Horatio and the calle Arquímedes.

The neighborhood is named for the river which once ran along what is today the Campos Elíseos area on the neighborhood’s southwest border. The river was in fact named for the Jesuit, Juan Alfonso de Polanco. He was an important secretary to Ignacio de Loyola who’d founded the order of Jesuits in 1540. Some of Polanco’s descendants arrived in Mexico as officials of the Spanish Crown in the 18th century.

The station logo represents the Clock Tower in Lincoln Park, an enormous and very-well planned 1938 city park. The station receives on average, about 26,ooo passengers every day.

Chapultepec's most visible corner is a placid respite from the City.