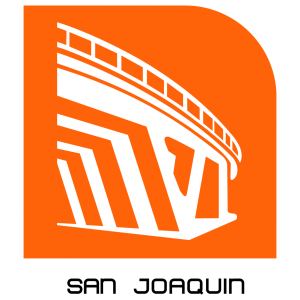 Metro San Joaquín is named for the Viaducto Río San Joaquín highway, which was once in fact a river.  Today, the viaducto is the main division between the Polanco and Granada neighborhoods to the south. To the north are the multiple micro-neighborhoods sometimes collectively referred to as “Anáhuac.” These include the colonias Dos Lagos, Ahuhuetes Anáhuac, Popo, and Pensil North & South.

The station logo refers to the highway, as is illustrated in the photo above. The highway is named for the former river. The highway traces much of the former course of the river. This was reduced to a minor canal by the 19th century.

Metro San Joaquín is sometimes used to reach the northwest points of Polanco/Granada. Among them are the Soumaya and Jumex museums, and the Aquarium. Closer to the Metro station, is the new Parque Lineal which lines both sides of the famous Cuernavaca Railway. The beloved Mercado Granada is, perhaps fortunately, not too close to the actual Granada which has seen decades of major construction. It’s actually almost underneath the Viaducto.

On the flip-side, all of that Granada construction has bolstered and improved the many micro-neighborhoods of Anáhuac. For residents who prefer houses to the shiny towers, many of these smaller neighborhoods have become tree-lined sanctuaries and models of mixed-use zoning. Shops and offices are a little better integrated to the north of the Viaducto.

Metro San Joaquín is at the heart of all of these vibrant neighborhoods. They’re making a comeback after years of neglect, and you’re welcome to be a part of the neighborhood revitalization.

Last stop on Metro lines 6 and 7, Rosario is the only surface level station on either line.

Easily one of the most photographed stations in Mexico City's sublime underground.

Metro Camarones is not just one of the most photographed stations, but one of the best designed and deepest.

A front door on the Parque Bicentenario, and an interesting angle on post-industrialism and mid-century socialism.

Even today, one of the most famous stations in the entire Metro System, don't go if you don't know what to look for