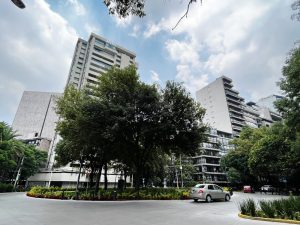 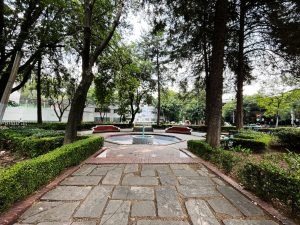 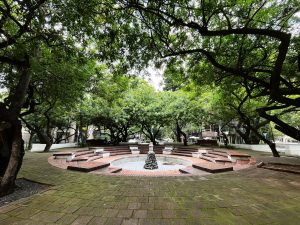 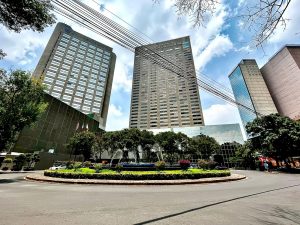 Campos Elíseos is a beautiful tree-lined divided avenue on the border between Polanco and Chapultepec park. The street follows the original contour of the Rio de los Morales, which served as a natural boundary for the colonial-era hacienda of the same name.

The name of the avenue comes, via the French, Champs Elysées. Both names refer to the Elysian Fields, an ancient Greek conception of the afterlife, and a final resting place for Greek military heroes. Of course, here, the early 20th century adoption of the name more directly references the Parisian avenue, thought by many to be the most beautiful in the world.

The avenue arcs in a length of some two kilometers, touches the Paseo de la Reforma at the Bolívar Monument, then continues northwest for 1.25 kilometers more. To the west, it borders the Parque Libano, named for the Lebanese Embassy. To the east, the arc defines a neighborhood of international hotels and embassies, especially. It establishes the contour we’ve called Chapultepec Reforma, home to many of the City’s most important museums.

Campos Elíseos is most famous, though, for it’s four glorietas, or traffic roundabouts (pictured above). These were built in the 1930s and still contain their fountains and benches in the distinct style of that time. The most famous, arguably, is that at Aristóteles. It bears a sculpture, “El control de las fuerzas” by artist Juan Carlos Canfield. This was dedicated in 1980. For the sculpture, the glorieta is sometimes called the “Glorieta de los caballos,” or “Glorieta of the Horses.”

The Turibus Polanco Circuit stop is at the intersection with Arquímedes. The marker on the map on this page indicates this intersection. The most beautiful and walkable section of the avenue is to the immediate east of the stop.

The Parque Líbano is a green area of some 5.5 hectares.

Embassy of Canada in Mexico City

The Parque Líbano is a green area of some 5.5 hectares.