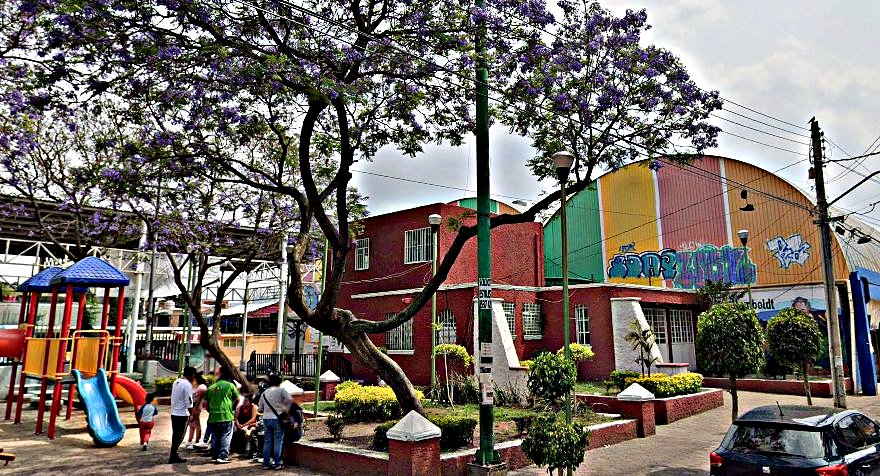 The neighborhood was hit particularly hard by the September 2017 earthquake. It’s still in recovery. But with all nautically themed street names, the neighborhood’s sense of humor has helped residents to get through it. All of them were affected, and many very deeply. The name really just refers to the fact that the neighborhood is flat, at the level of the lake and chinampa district immediately to the south and east.

Frequently passed through on trips into the Bosque de Tláhuac, the neighborhood’s market makes a nice pre-picnic stop. A 2017 UAM study counted some 111 merchants in the market proper. Among these are some fine eateries. It’s not an enormous market, but it obviously bears much of the weight of providing a modern commercial center to the neighborhood. Surrounding streets are likewise commercial.

The Mercado Colonia del Mar is also home to the local territorial administrative office. There’s a public library dedicated to Barón de Humboldt. That’s Alexander Von Humboldt to most of us. Of course, the market shares its block with a kids playground and covered basketball court, too. Together, they make it into the true center of the neighborhood.

One of Mexico City's most rural and far flung public markets...

The main market and commercial center in San Pedro Tláhuac...

The essential stop for eating in Mixquic...

A classic neighborhood market in Tláhuac...

One of Mexico City's most rural and far flung public markets...

The main market and commercial center in San Pedro Tláhuac...

The essential stop for eating in Mixquic...