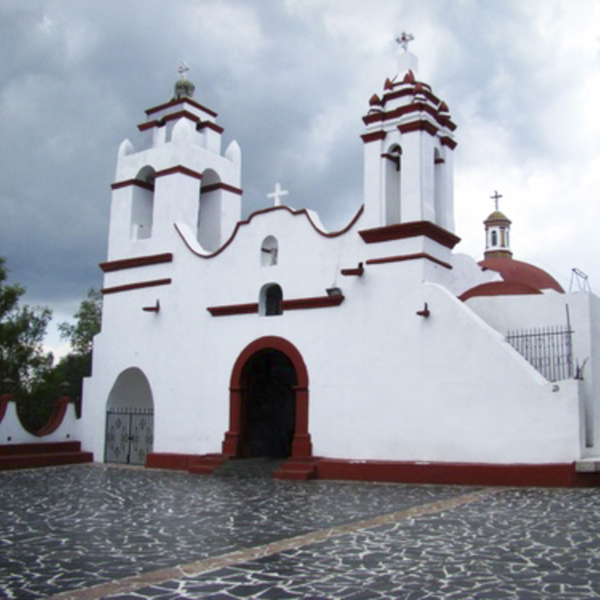 La Lupita Chapel is a historical church from the 16th century. Built on top of a former pyramid, (a teocalli, the Nahuatl word derives from teō- or tl ‘god’ and cal-li ‘house’ or ‘enclosure,’) it’s a big part of San Pablo Oztotepec‘s history and culture. The site quite obviously had ceremonial significance even well before the Spanish period. The federal government recognized the chapel as a national historical monument in 1933.

The chapel is also famous for the signing of Zapata’s Plan de Ayala, which occurred here in 1914. Zapata’s army had a headquarters in the town at the time. The house where the soldiers stayed is today a popular museum just down the street.

Arguably even more important to the townspeople, the Sanctuary of the Lord of Chalma shares the same atrium, the big plaza out front, with the Lupita Chapel. The sanctuary is important because the people in and around San Pablo Oztotepec have made the pilgrimage to Chalma for more than a century. (See the entry on the Sanctuary for more on the subject.) Golgota street divides the plaza of both churches, and extends for a considerable distance in front of La Lupita. The steps at the middle of the plaza are simply stunning to look at.

The chapel remains in remarkable condition although modifications were extensive in both the 17th and 18th centuries. It’s rather extreme asymmetry lends to that feeling. And two very different bell towers are unusual for their time. One has an arcade beneath, and the other has a ramp. The surrounding wall is also very well regarded for the stations of the cross done in mosaic tiles. The church is today dedicated mostly to followers of  San Judas Tadeo. A well-loved historical image of the Virgin of Guadalupe was transferred to the Sanctuary some time ago. The chapel is today sometimes referred to as the Church of San Judas Tadeo.

One of the country's most spectacular national parks takes up a massive part of the south of the City.

The legendary Shrine of the Lord of Mercies is more than a mountain church. It's been an inspiration to generations