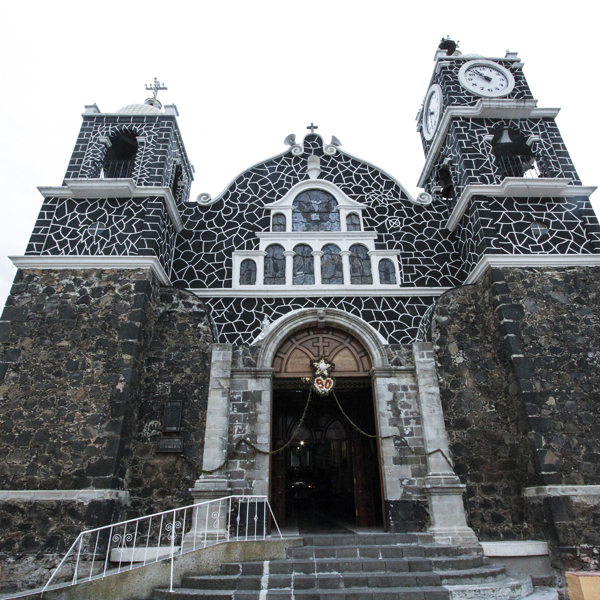 The Señor de Chalma Sanctuary is known colloquially as La Chalmita. In San Pablo Oztotepec, it’s likely the most important church because of the local people’s devotion to the Lord of Chalma. Chalma is the second most important pilgrimage site in Mexico after only the Basilica de Guadalupe. It’s about a 2.5-hour drive, or more importantly, about 18 hours to walk.

Hundreds of people from Oztotepec, and from all over the region have made this walk. Many of them have done so multiple times.

The Pilgrimage to Chalma

One of the caves of Chalma was said to contain a human-sized, black, cylindrical idol. This was dedicated to  Oxtoteotl and said to have healing and magical powers. Oxtoteotl was a also a god of human destiny. The pre-Christian pilgrimage also involved days of walking, even being lost in the mountains. Similar to the Christian rite, the devout bathed in a river fed by a sacred spring and drank the holy water before entering the cave.

In 1539 or 1540, the reports began to circulate that the cylindrical idol was found in pieces and above it a black Christ made of the same material appeared. This was after a few years of Augustinian evangelizing in the area. The black Christ is known as el Señor de Chalma, Our Lord of Chalma.

The current pilgrimage begins on January 3, each year and lasts eight days. Recent years have seen about 20,000 participants take part each year. Because of the great numbers, the many prilgrims have needed official support along the way.

The Sanctuary of La Chalmita in Oztotepec was built as one of many starting points for the annual pilgramage. It allows the devout to hear a mass and receive a blessing for the coming journey.

It was built practically on the grounds of the Lupita Chapel. That chapel is itself built on a teocalli, likely a low pyramid, but certainly a pre-Christian sacred site. This church was built between 1955 and 1960. The committee who organized the construction were headquartered in the nearby Quinta Axayopa Cultural Center. One of the most prominent residential buildings in the town, today it’s the area’s most beloved cultural center and local meeting place.