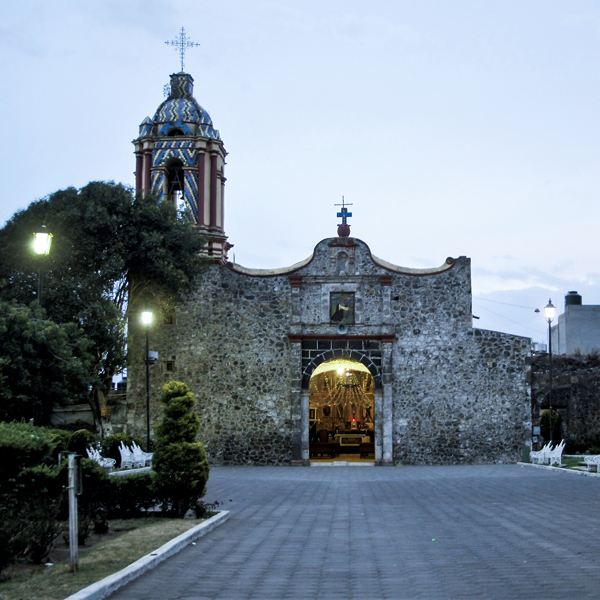 San Pablo Oztotepec is one of Milpa Alta’s 12 original settlements. Centered around the church and former Franciscan monastery of San Pablo Apóstol, it’s a fascinating and rugged mountain town. Ozotepec means “on the hill of the caves” in the Nahuatl language.

The people today are primarily Nahua, descendents of the original Malacachtépec Momoxco settlers. Along with Santa Ana Tlacotenco and San Lorenzo Tlacoyucan, it’s one of the primary places where Nahuatl is spoken in the City.

The town’s history begins in 1483 when seven Nahuatl-speaking Mexica groups from the north managed to overcome the territory of the preceding peoples. They’d settled in the region in the 12th and 13th centuries. The towns today known as San Mateo, Santa Martha, Los Angeles, and Santa Cruz, soon developed, as did the nearby towns of Tecómitl, Ixtayopan, in Tlahuac and Tulyehualco in Xochimilco.

In Independent Mexico, Milpa Alta was part of the State of Mexico. In 1854, the Federal District was expanded to include the old Lordship of Malacachtepec Momozco. At the beginning of the 20th century, Emiliano Zapata settled here temporarily. His Plan de Ayala was even ratified in town, in the La Lupita Chapel. In fact, the local headquarters of his army is one of the town’s most-visited sites. Some of the demands made during the revolution were met, and the town realized somewhat greater autonomy. This was to their advantage in the long struggle for control of their communal lands.

The center of the town of San Pablo Oztotepec is the 16th- and 17th-century San Pablo Apóstol Church and Monastery. With a very large atrium, it worked as a churchyard for outdoor services and for the mass baptisms. The surrounding walls are still impressive, even now hundreds of year later. The façade is sober with a semi-circular arcade which had been an open-air chapel. Inside, you’ll find a sculpture of Saint Paul and an altarpiece dedicated to Saint Michael.

The church in the neighboring town of San Salvador Cuauhtenco is called the Iglesia del Divine Salvador.

The seat of local government, culture, and trade in Milpa Alta

A beautiful place to start your trip into Milpa Alta...

The youngest of the original towns in Milpa Alta, this one makes up for it with a massive balloon festival.

One of Milpa Alta's furthest-flung pueblos originarios, this one is on the slopes of the Tlaloc Volcano.

One of the country's most spectacular national parks takes up a massive part of the south of the City.