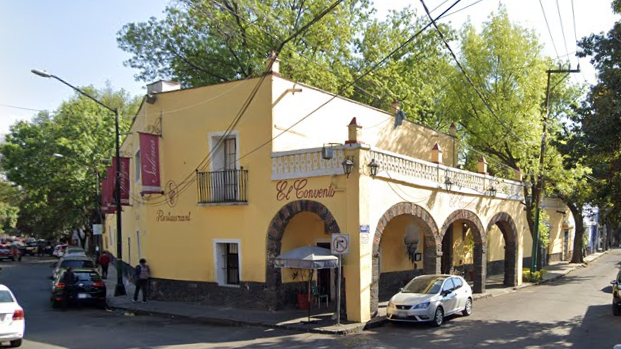 The Casa de los Camilos is a historic property just across the street from the Frida Kahlo Park. Today a private restaurant and boutique hotel, it’s long been a landmark in the Concepción neighborhood.

The building was the site of the monastery of the Camillian order. The Camillians are a Roman Catholic religious order dedicated mostly to caring for the ill, and especially the terminally ill. They were founded in Rome in 1582 by St. Camillus de Lellis. The Red Cross used today to signify medical care (in Christian-dominant countries) comes from their symbol.

The Camillians arrived in Mexico in 1755. They set up shop in the Historic Center. The building here dates from the late 18th century and the order used it until the mid-19th century. It came to be known as El Rosedal because the priests took to cultivating a rose garden in addition to their work caring for the sick. The site was home to a famous spring of water which was still flowing in the 1960s. This was referred to as the Ojo de los Camilos or Momolulco. The Nahuatl name means simply “place where the water flows or gushes.”

The religious reform of the 1850s led to the nationalization of the property. Thereafter, it was used as an agricultural colony and briefly as a juvenile reform school. Later, the building would be used as a theater, cinema, cafeteria, private home and offices. The property was declared a protected historic site onlu in 1970. The house still has an interior courtyard with a fountain with access from both buildings. The main façade presents a portal with the three distinctive arches. The restaurant, El Convento, has occupied the Casa de los Camilos building since 1957.