Lomas de Chapultepec has long been an affluent community on Mexico City's western edge.  So successful has the community been at minting its own lifestyle brand that the name "Lomas" has been attached to surrounding communities in the City, and still more in neighboring Naucalpan in Mexico State.

It is quite possible then to speak of a "Greater Lomas" that includes all of these various hillside communities. Our map shows just the official Colonia of Lomas de Chapultepec. But points of interest extend in just about every direction from there.

Lomas is, by and large, a residential community. It is therefore home also to some prominent businesses and government agencies. Chief among these, at least in so far as they are of interest to international travelers, are private art galleries and international embassies. These seem to prefer the relative tranquility of streets lined with homes rather than giant commercial developments, or facilities and installations.

The area which developed from the "Chapultepec Heights" of the 1920s, has always been heavily wooded. This is in large part because the "hills" for which it is named, not only provide natural drainage to the area, but valleys in which the many trees have been permitted to continue their quiet lives.

Embassy of Vietnam in Mexico City

Embassy of Italy in Mexico City 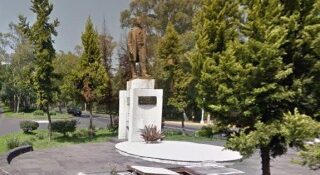