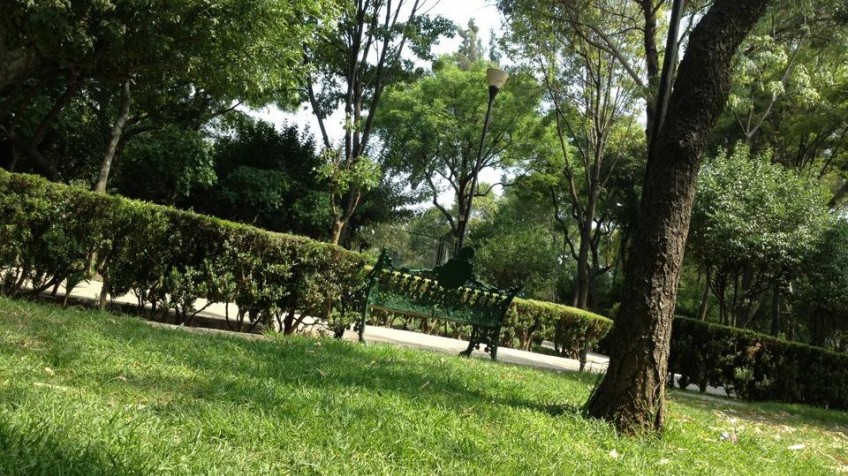 Parque Álamos is named for the 1847 USA invasion hero Felipe Santiago Xicoténcatl Corona.  The park is in the very center of the Álamos neighborhood. The Mercado Álamos is less than a block away. The neighborhood is loaded with sidewalk cafes, in particular, in the area surrounding the park, but the market is always extra special for lunch.

Felipe Santiago Xicoténcatl Corona (1806-1847) was a Mexican military man of indigenous Nahua descent. Born in the State of Tlaxcala, he was promoted to Lieutenant in 1829 by President Vicente Guerrero. Having participated in numerous campaigns in the Yucatán and Tabasco, during the USA invasion he was wounded in the Battle of La Angostura.

On September 12, 1847, he was entrusted with the defense of Chapultepec Castle. On September 13, he was again wounded trying to assist the flag bearer. He’s said to have fallen wrapped in the flag of the battalion he was leading. He was buried in the chapel of San Miguel Chapultepec, and later at the Pantheon of San Fernando in what was then the outskirts of Mexico City.

During the centenary of the Battle of Chapultepec, his remains were exhumed, cremated, and finally deposited in the Niños Héroes Monument in Chapultepec Park.

As one of the most accessible of Benito Juárez neighborhoods, the Álamos colonia is walkable, friendly and just steps from either the Xola or Viaducto Metro Stations. If the Market and the Parque Álamos aren’t quite enough, the streets are lined with secretive and curious homes, a few from the 1920s and 30s. And the Nuestra Señora de la Consolación Church, begun as a factory, includes one of the most startling of 20th-century church interiors.