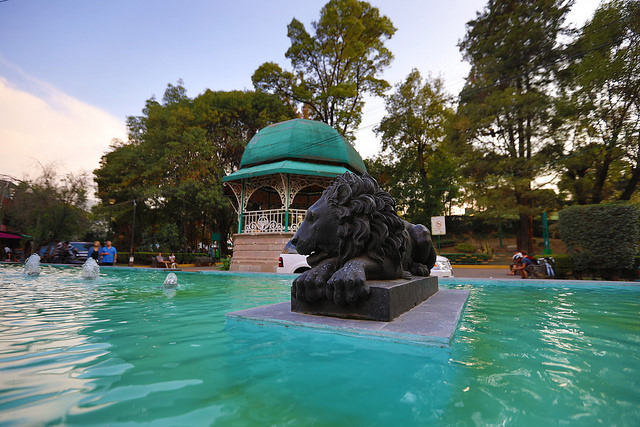 The Parque Mariscal Sucre is one of few parks that could survive a five-way intersection ringed by an absurd seven-sided pedestrian bridge at its heart. The park’s great age and giant mature trees have somehow shielded neighborhood visitors and kept them coming back.

The park is symbolized by the beloved Kiosko Mariscal Sucre. This is known also as the “French Kiosk.” It was donated, along with the fountain and lions, by developer Gustavo Antonio Martínez Michaus in the 1920s.

The early Del Valle neighborhood grew in tandem with the park. It was the center of the northern colonia for most of the mid-20th century. Only in the 1970s, the stake of the “eje” road system plunged through the park’s center. The park languished, neglected. The City even thought of moving the beloved kiosk to another park. But this finally galvanized the neighborhood.

They organized, and repaved the park. They replaced the cobblestones, benches, and lampposts. Eventually the local government got in on the action. It was the closing of the circular “glorieta” to traffic that really saved the park. Residents can stroll the surrounding shops without fear of road rage.

Today, the Parque Mariscal isn’t just a traffic circle in the shadow of a traffic directing angel. It’s again an integral part of the neighborhood, even with the elevated seven-sided pedestrian walkway.

The most important park in Santa María Nonoalco...

A popular park for southern Benito Juárez and its many residents...

The most important park in Santa María Nonoalco...