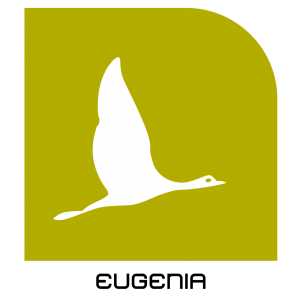 Metro Eugenia is one of those few stations whose station logo relates to an interpretation of a European language, in this case Greek. The name, both for the masculine, Eugene, and as here in the feminine Eugenia, means, well-born, or even noble-born. The stork is of course a reference to that idea of birth. And the station is named for the Avenida Eugenia which intersects here with Cuauhtémoc Avenue and calle Concepción Beistegui. All are in the Benito Juárez alcaldía.

Few recall today that the avenue is named for a country rest home, something like a small hacienda house. La Quinta Eugenia was named for its owner, one Señora Ojeda de Castelló. She was the wife of the director of the National Bank of Mexico, a Señor José Castelló. They lived at the quinta which was part of their farm. And most quintas operated something like a B&B, with room and board available, generally to a respectable clientele.

As she dedicated herself mostly to philanthropic pursuits, in about 1924, (the year is uncertain), the name of the avenue was changed in her honor, as the home had been at the intersection with Coyoacán avenue. Today a very large housing development at the same corner carries on the name. Inside is a tall sculpture by Mathias Goeritz.

Among Goeritz earliest works in Mexico...

A masterwork of 20th-century interior design.

For going on 65 years, leaving Mexico City to the northwest means one unmistakable vision...

One of Goeritz's most remarkable works, newly restored, and better than ever.

]The beloved Fountain of the Frogs in the Bosque de Chapultepec...

A fantastic floating causeway between sections 1 and 2 of Chapultepec Park.