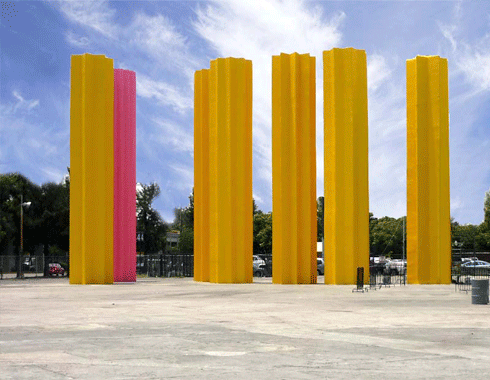 La Osa Mayor is one of just three invitational works completed for the 1968 Ruta de la Amistad. This was a big part of the “Cultural Olympiad” that welcomed athletes and spectators to the 1968 Olympic Games in Mexico City. 50-some years later, they’re still among the most prominent public art works in the City.

On the grounds of the Palaciío de los Deportes, here Mathias Goeritz left a big reminder that the arena itself was developed for the ’68 Olympics. The organizer of the overall Route of Friendship, Goeritz stood way back from the events mostly in Coyoacán and Tlalpan in the City’s south.

In antiquity, the “Great Bear” was one of 48 constellations originally listed by Ptolemy in the 2nd century CE. Ptolemy drew on the work of Greek, Egyptian, Babylonian, and Assyrian astronomers. It’s the third largest of the 88 modern constellations, and visible year-round from most of the northern hemisphere.

The sculptural group has stood in varying stages of neglect over its five decades of life. Goeritz was certainly concerned here with reaching a harmonious relationship with the Palacío, a geometric masterpiece in its own right. Simple polyhedral concrete columns, six in yellow, and one in Mexican pink, reach a maximum height of 15 meters. The mini-constellation they form needs just to be imagined. It’s usually called the Big Dipper” in English.

Restored in 2013, la Osa Mayor is at last in pretty good shape. It’s today mostly visited by those en route to the events within the Palacio, but then, the Big Dipper, on which its based doesn’t get a lot of visitors either.

Foro Sol has been home to baseball, auto racing, and more music festivals than you could possibly dance to.