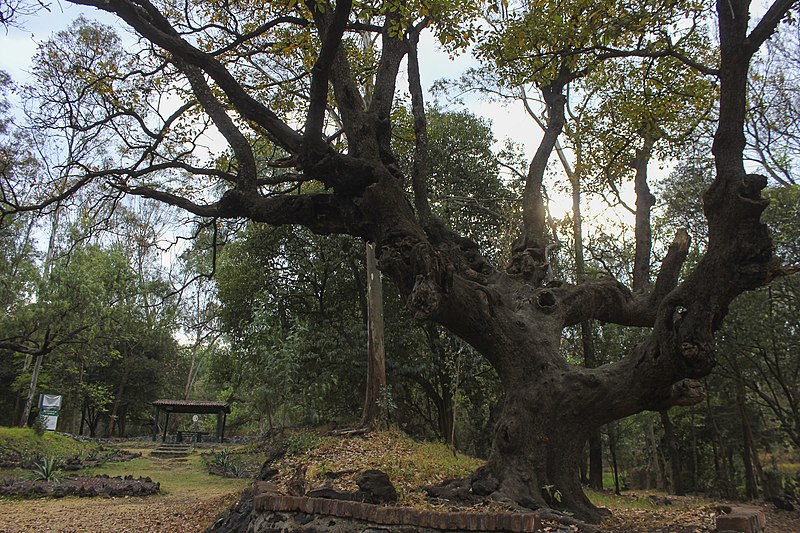 The Bosque de Tlalpan is the Forest of Tlalpan.  It’s a protected natural area just east of the Six Flags amusement park, and west of the Cuicuilco Archaeological Site and Museum. The reserve is 253 hectares of wooded area which includes natural forest and planted tree nurseries. These were largely planted in the 20th century.

Opened as a zoo in 1970, the animals only stayed until 1988. Today the park is home to a cultural center, athletics facilities, and recreational areas. The area is also home to a unique ecosystem: xerophilous scrub and oak forest.  It’s been a protected area since 1997.

The land had once been part of the Loreto and Peña Pobre paper mills, today remaining only as the Plaza Loreto shopping center. The reserve was purchased by the Mexico City Government in 1968. Today, it’s a a forest with great biological importance, providing carbon capture, water infiltration, erosion control, and conservation areas for native species. Although it’s home to many non-native species, there are relicts of oak and xerophytic scrub plants. It’s presently home to 200 species of plants and at least that many animal species.

The Forest of Alberto Lenz

The paper factory founded in 1845 is in some measure responsible for the continued existence of the forest. In 1905, a German immigrant with experience making paper in Germany and Switzerland acquired the Loreto paper factory. In 1924, he bought the Peña Pobre factory, actually within today’s forest.  Lenz had already worked to reforest much of the Desierto de los Leones area by this time. He went on to replant the Zacayuca hill with hundreds of thousands of trees of different species. Mimosas and eucalyptus trees were planted to fix soil and increase humidity. Pines, cedars and sacred fir were planted for the cellulose to make paper. Lenz was said to have planted ten trees for every tree he felled.

The Bosque de Tlalpan is today quite bit closer than the big national parks in the south of the city. As a reserve for runners, it’s highly valued. It’s also a surprisingly vibrant natural area, perhaps just big enough, in an overwhelmingly urban area.