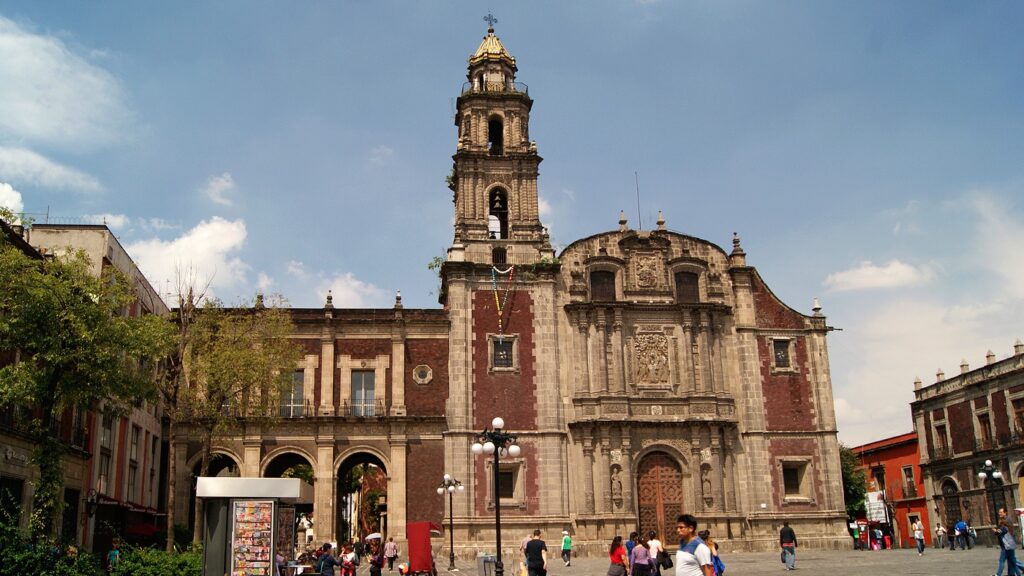 Much loved, in the neighborhood and beyond, the Temple of Santo Domingo is an 18th-century Baroque temple. It was the seat of most important Dominican monastery in the city for many hundreds of years, but today only the temple remains. The front of the temple opens onto Plaza 23 de Mayo, although the larger square to the south, and much of the neighborhood are together referred to as Santo Domingo, after the temple.

A simpler and smaller temple was begun here, probably in 1527 and completed around 1530. That structure, badly damaged by flooding was rebuilt beginning in 1556 and completed by 1571.

The larger project was also to expand the monastery and other buildings around the main temple. That church, too, was then severely damaged during another  flood and Pedro de Arrieta was chosen to replace everything in an even more lavish and ornate style. His work began in the first half of the 18th century, and largely determined the temple’s appearance as we see it today.

During the Reforma period of the mid-19th century, much of the monastery’s assets were seized, and many were damaged. Construction of Leandro Valle street next to the temple destroyed the monastery and surrounding chapels. Only the southernmost Chapel of Our Lord of Atonement was preserved and remains at the corner of the Plaza 23 de Mayo and Calle Bellisario Dominguez.

Arches to the left of the temple were added prior to the 1968 Olympics to disguise the passage to Calle Leandro Valle and to harmonize the temple’s place on the plaza.

In a Latin cross plan, the temple consists of a single longitudinal nave. The vault is built from tezontle stone and rests on arches of quarried stone. Both the nave and the transept contain semicircular apses and enormous altarpieces. Two golden altarpieces in the transept are baroque works of the 18th century. That in the west arm was completed in 1754 and dedicated to the Virgin of Covadonga. The easter altarpiece is dedicated to the Virgin of Camino.

The remains of Tlacahuepantzin Yohualicahuacatzin, Pedro de Moctezuma, a son of Moctezuma II, are buried within the temple.

The main altarpiece is by the renowned Manuel Tolsá. The Christ statue within it is the oldest image in the church. Dating from the 16th century, it was made from a paste of cornstalks and is popularly known as The Christ of the Novitiate (Cristo del Noviciado). According to legend, it was donated to the Dominicans by a pair of angels.

Eleven side chapels are dedicated to:

The most important chapel had been the Chapel of the Rosary by the architect, Lorenzo Rodríguez, who also built the tabernacle. Widely considered the  most beautiful in the city, it was demolished during the construction of Calle Leandro Valle. The space in the outside wall where the chapel had been is still apparent.

The remains of a space known as “The Courtyard of the Generals,” today part of the Cultural Center of Contemporary Mexico. This can be seen within the cultural center on Calle Leandro Valle through the arches to the left of the main church façade.

The old church of an important early Dominican convent in the Historic Center...

The old School of Law in a much older former convent...

A very old church in Tepito recalls the fall of Ancient Mexico in its very name...

The old church of an important early Dominican convent in the Historic Center...

The old School of Law in a much older former convent...

A striking Baroque work by Pedro de Arrieta stands the test of time.