The Edificio de la antigua Aduana, is the old Customs Authority Building. It takes up the east side of the entire south of the Plaza de Santo Domingo. It’s too big, and frankly too grand for visitors to think it’s just some historical building. From the plaza, one can’t quite get a view of the fact that it’s part of the larger complex of the Federal Secretary of Education. They occupy the entirety of the block, having begun with the old Convent of the Incarnation which occupies nearly the entire block east and behind today’s Old Customs Building.

The Real Aduana de México was begun in 1574, when a tax system was necessary to support the Spanish Empire. A first building on 5 de Febrero street served as HQ for a hundred years.  In 1676, several houses belonging to the Marquesa de Villamayor were put to the customs office’s use. These were on the Plaza de Santo Domingo but northwest of the current building. In 1688, they were bought with the intention of expanding them.

In 1727, the customs office purchased the old estate of Francisco de Oñate y Azoca. This was next to the houses of the Marquesa de Villamayor. Construction began in 1729 on a project to unite all the buildings on the south of the plaza under one roof. It was all directed by the most esteemed architect of the age, Pedro de Arrieta. He finished the southern half of the building we see today in June of 1734. At one point in 18th century, nearly the entire ground floor was used for storage of imported goods waiting to “clear customs.”  By 1777, the building was expanded all the way to the north to the corner of the Palace of the Inquisition. This was done by purchasing several houses from the enormous Convent of the Incarnation.  Again it was seriously remodeled. The building then remained a part of the Federal Government straight through the 19th century.

After having been the seat or offices of several government agencies, the Federal Secretariat of Public Education took over the complex in 1921. They continue to use the building even to this day. 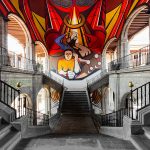 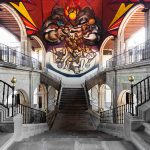 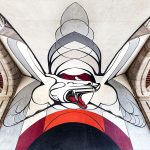 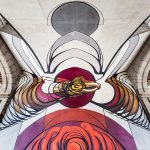 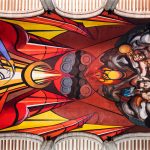 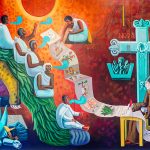 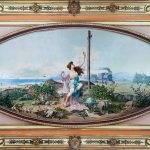 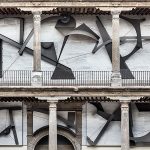 The Edificio de la antigua Aduana is most famous today for the extensive mural by David Alfaro Siqueiros, Patricios y Patricidas (Patriots and Patricides) (Photos 1-5, above). Siqueiros worked on the enormous mural intermittently between 1945 and 1971. The mural depicts an allegory of constant and eternal ideological struggles that seem to repeat themselves cyclically throughout history.

The entire building operates as something of an extension of the SEP Museum. The entrance is at the main SEP building entrance.

Photo 6 is Fray Bernardino de Sahagún and His Rescue of the History of Mexican Culture, (1991-1992) by artist José Chávez Morado. The work of Fray Sahagún is discussed in the article on the Colegio de Santa Cruz de Tlatelolco, where he and his disciples did their most important work.

The final photo depicts a work in steel, iron, and marble by artist Manuel Felguérez. Equation in Steel, (2010), was commissioned for the commemorations of the Bicentennial of the Independence of Mexico and the Centennial of the Mexican Revolution. The work is a meditation on the exact sciences, especially mathematics, as the basis of other disciplines and knowledge.

One of Mexico City's most important medical facilities....

A striking historical cultural center and theater, it's one of the City's most photographed landmarks.

One of Tlatelolco's oldest continually occupied sites, it's the former seat of the Indigenous Government.

One of the leading museums of art in the country, the SHCP resulted just from tax payments - in art!