The Museo del Fuego Nuevo, literally the “New Fire”museum is built around understanding one of Iztapalapa’s most important celebrations. The New Fire Ceremony has been observed since the Pre-classical period, and was likely inherited from even more ancient inhabitants of the Valley of Mexico.

The ceremony’s importance lay in the search for balance and order in the universe. And participants relied upon harmony and collaboration in order to achieve and maintain such balance. The Aztec cosmological view held that the ceremony was representative of the creation of the Sun. The renewal of the commitment at the end of each era helped to maintain the continuity of solar movement and therefore of time. It was a pact sealed by the gods to give life to the world. Participants in the ceremony reaffirmed that pact.

The last performance of the ceremony likely happened on November 6, 1507.

Sculptures of gods were ritually sacrificed as were ornaments and relics. Lay people likely also rid themselves of representations of divinities kept on home altars and destroyed belongings from the previous era. These would have included dish ware, clothing, and any instruments associated with fire. This included flint which, as it couldn’t be burned, would have been discarded in a ditch or otherwise buried. Houses were cleaned and everything was put in order and as night descended all fires were extinguished, leaving the entire community in complete darkness.

Dressed as divinities themselves,. at dusk the chief priests began a procession, a walk of divinity. The journey brought them to the main enclosure of the hill Huixachtecatl in Ixtlapalapan. The priest of Copolco was in charge of lighting the fire.

Pregnant women wore masks of maguey in the belief that, were time to stop, lesser gods known as Tzitzimime might descend and make the expectant mothers into something like themselves. The rest of the family stayed awake on the roof and remained awake. Children also wore maguey masks, as even a few moments asleep could see them turned into rats.

In some six hours, the priest reached the top of the Huixachtecatl to wait for the Pleiades to move into position. At just the right moment, the Copolco priest lit a large bonfire such that it could be seen from the entire countryside. The people on their rooftops drew blood from their ears and spilled it in the direction of the light as a form of penance.

Priests from the surrounding villages approached to take the new fire and to distribute it among the main temples. They’d previously gathered firewood to now make new fires. It’s said that there was so much light as to appear as though it were daytime.

By dawn, everyone was dressed in new clothes, and new items for every day living were used. It was also customary to fast, without even water. Tzohuatl, that is amaranth seeds and honey could finally be eaten in the early afternoon. 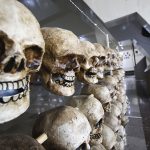 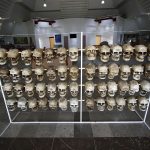 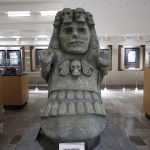 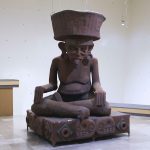 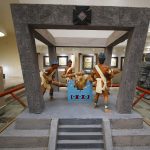 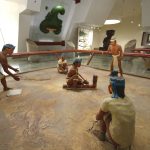 The museum began with an excavation of a pyramid at the top of the Cerro de la Estrella mountain in 1973. The collection of artifacts which resulted included many that were quite large.

Architect David Peña was commissioned to build facilities to preserve, protect, and advance the study of the collection. Construction of the museum began in 1997 and the new museum opened in January of 1998.

The museum is built in a pyramid-shape. Exhibits include works from both the pre-Hispanic and the colonial eras, all of them origin found in the area. The museum also dedicates considerable space to explaining the Theory of of the Five Suns, representation of the pre-Hispanic calendar, plus codices, and maps of Culhuacán and Iztapalapa from the 1580. There are also models of the New Fire Ceremony being performed and of the ancient Lake Texcoco region.

The hill-top also includes the architectural remains of two monuments which were part of the same complex. The most important of these is the temple pyramid where the New Fire Ceremony was actually celebrated.