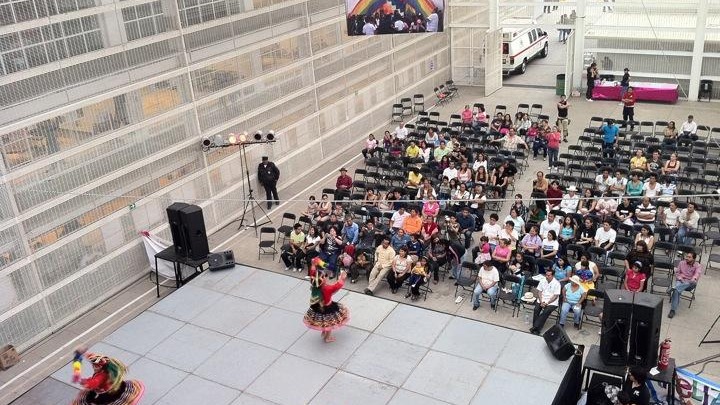 Primarily a performing arts space, the Center was builting only in 2009. Events focus on housing theater, contemporary dance, ballet, music with some circus music.

The Amparo Ochoa auditorium is likely the best known facility in the complex. But the center also hosts la Terraza Galería and several open-air galleries. The 11 classrooms and two halls are focused on workshops in dance, music, visual and performing arts among other subject. It’s also a well-known lectures and cinema venue.

The Center was designed by Raúl Peña Arquitectos. They’re best known for work they did on the Estela de Luz monument. Here they provided a galvanized corrugated sheet metal theater and rooftop gallery. There’s also a three-story classroom wing and fourth floor atrium.

The Centro de las Artes Santa Úrsula is a bit far from Metro Universidad, (about 10 minutes by taxi). It’s a short walk from Estadio Azteca stop on the Xochimilco Light Rail. It’s also an easy walk (less than 10 minutes) to the new Parque Cantera, in the next neighborhood over.

The deep history of one of the best-known landmarks on the Periférico highway.

A natural heritage in charge of the National Autonomous University of Mexico, located south of the city.

A two-footed Sun along the Ajusco highway...

Among the most lavish of Mexico City House Museums, it's also among the newest.