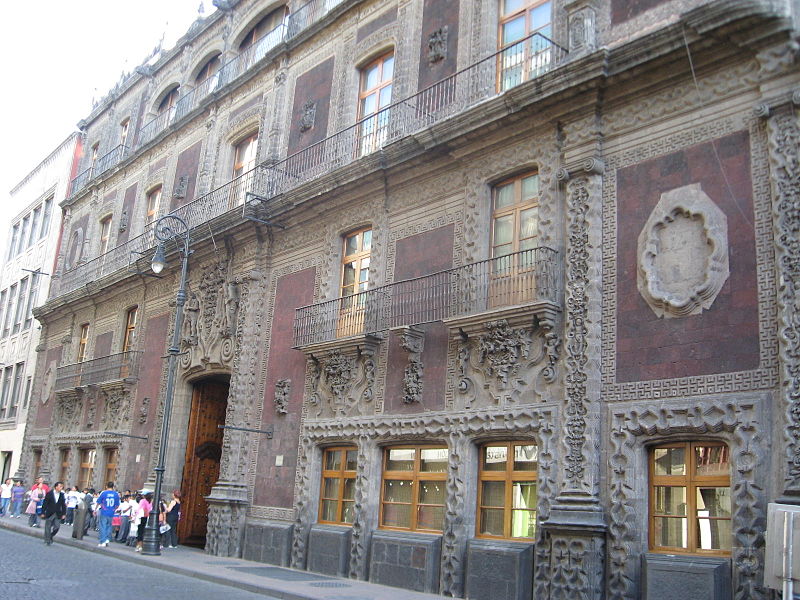 The Palace of Iturbide, built between 1779 and 1785, is an enormous residential building in the city’s historic center. Built by the Count of San Mateo Valparaíso, he presented to his daughter as a wedding gift. Agustín de Iturbide inhabited the building from 1821 – 1823. He accepted the crown of the First Mexican Empire in the same place after the war for colonial independence had been won, and ultimately left the place with his name.

Designed and begun by Francisco Antonio Guerrero y Torres, it was later finished by his brother-in-law, Agustín Duran. The only four story residential building of its time, it is widely considered a masterpiece of the Mexican Baroque.

With three floors and a mezzanine, it shows considerable Italian influence in the Baroque design. The façade is of tezontle and cantera stone. A central gallery is today closed to the public. The façade is decorated with carved stone with organic and geometric motifs such as flowers, small double-tailed mermaids, and graceful male figures. The courtyard inside is surrounded by eighteen arches and these are supported by Tuscan columns.

Although early in the 19th century the building housed the College of Mining, the Iturbide Palace was remodeled in 1855 and was used as a hotel for more than 100 years. The building was purchased by the National Bank of Mexico in 1965 and became the seat of the Banamex Cultural Foundation in 1972.

Temporary art exhibits are regularly held within the main building and these are very often among the most important in the city.