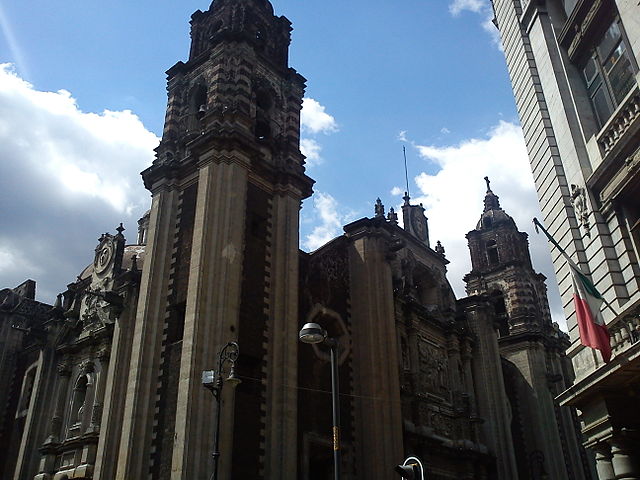 Mexico City’s “other cathedral,” La Profesa has long been an austere presence on the corner of Plateros Street, today’s Madero Street since as long as anyone alive can remember.

Although it’s today less-gawked-at or quietly ignored, it’s still a remarkable and shadowy presence. Home to one of the city’s most important religious art collections, it’s been a residential home to dozens of Jesuits. It’s been the seat of the Arch-Bishop. It’s been closed and remodeled, and still it quietly stands a few hundred meters from the Metropolitan Cathedral, in its resigned majesty.

An 18th-century baroque temple, officially called the Oratory of Saint Philip Neri and belongs to the organization of the same name. Originally part of an architectural complex called Casa Profesa, Jesuit priests here had taken a fourth vow of particular obedience to the Pope for doing missionary work.

An earlier temple at the site opened in 1610. That one was later replaced by the current building, designed and built by the celebrated Pedro de Arrieta. Built between 1714 and 1720, it has three naves, and remains a remarkable site.

In 1767, the Jesuits were expelled from all Spanish domains. La Profesa was handed over to the Congregation of the Oratory of San Felipe Neri after their temple was mostly destroyed in an earthquake in 1768. Prior to that, their home was the celebrated Miguel Lerdo de Tejada Library on today’s  Calle República de El Salvador. That street had previously been called Calle de San Felipe Neri.

By the beginning of the 19th century, la Profesa’s interior was redone in a neoclassical style. Manuel Tolsá designed another of his dramatic altarpieces. His Virgin of the Immaculate Conception, here, is said to be based on the socialite, María Ignacia Rodríguez de Velasco. She would go on later to assume prominent roles in the movement towards independence from Spain. But this is still just the beginning of some of the temple’s art, paintings, sculpture, and more.

While the Oratory Library has a number of exceptional books (8,014 to be precise), including remarkable 17th and 18th-century volumes from Mexican, Italian, and French publishing houses, it’s better known for the art gallery. The Pinacoteca contains many of the most important paintings from the 17th, 18th, and 19th centuries.

Opened only in 1978, the Pinacoteca galleries had been lavishly rehabbed and can be toured Saturdays from 12 to 2 p.m.

The temple is also remembered for having hosted one of the most important conspiracies against the independence movement in 1821. The conspirators gathered here in a series of ultra-secret meetings sympathized with the idea of locating a Spanish-born absolute monarch in Mexico, even as a liberal constitutional monarchy was being planned in Spain under a king installed by Napoleon.

Later, during the Cristero War of 1926 – 1929, La Profesa served as the provisional cathedral for the city while the Metropolitan Cathedral was closed.