Begun in the 16th century, the Church and Convent of San Bernardino de Siena were badly damaged in the 2017 earthquake as were several parts of the wall surrounding the complex. The photos below show the results of extensive renovations completed in 2020.

The church remains one of the spiritual centers of Roman Catholic Xochimilco. It’s also an important reference point for everyone who visits. A rare 16th-century altarpiece inside is in the Plateresque style. The only other altarpiece like it exists only in Huejotzingo, Puebla, although the Palacio de Correos in Mexico City is in a related Neo-Plateresque style from the 19th century. For nearly two centuries, the complex included a school for the indigenous peoples of the area. Much of the art in the many surrounding communities, especially the carved wooden sculpture, was created here.

Like many of the 17 chapels in the Xochimilco Center, the Cathedral is built on top of a teocalli, an ancient ritual and ceremonial site. In this case, it was dedicated to a goddess called Cihuacóatl. The temple here was called Tlilan or Tlillancalco, meaning “dark house.” Records indicate that it was venerated by the Mexicas, but it was especially a site run by the Xochimilca people. Cihuacóatl had been venerated by the Otomi people, but the Mexica people brought her from Tláhuac after their conquest in 1430 and she again came to symbolize the agricultural region of the south and east of the lake.

Broadly associated with fertility and midwifery, the Xochimilca people likely made this a particularly elaborate temple. She was afterall, the protector of all of the Chinampero region and people, including those in Culhuacan and Tláhuac.

The Cathedral has not only revealed multiple idols built into its walls, but is believed to have been built with special regard for some of her characteristics. Stones are laid out in spiral shapes in the bell tower. And the Spanish placed chalchihuites, sacred stones from an ancient government building in the frieze.

The orientation of the Cathedral, relative to the most prominent of the surrounding mountains, also indicates that it was oriented to take advantage of astronomical events. Some of these are likely coordinated with days of the ancient civil, agricultural, and ritual calendars of the Xochimilca people.

As Xochimilco was the most important town in the southern Valley of Mexico, the construction of this monumental church began early, in 1535. Various construction stages lasted over the next 65 years until 1600. The portion of the monastery was completed by 1538. Residential areas for monks were finished by 1585, as was the main church. The cloister was only completely finished in 1604. Most of the money for construction was provided by the indigenous leaders of Xochimilco.

In 1552, part of the main portal fell and needed to be reconstructed. That was finished in 1590. The school at the monastery then opened in 1609. Subjects taught included rhetoric, theology, arts and letters. In fact, there was still a primary school on the site well into the 1970s. The church and monastery underwent major restoration work in the 1960s. This was on both the building and on the paintings, altarpieces, and sculpture within. As mentioned above, the San Bernardino Church was badly damaged in the 2017 earthquake. Renovations were only concluded in 2020.

When facing the main entranceway to the Cathedral, the Chapel of the The Indians (sometimes it’s referred to as the Pilgrim’s Chapel) is to the immediate right, (south). A bit further south is the entrance to the north-facing Chapel of the Third-Order.

The Cathedral faces an enormous agglomeration of former atrium and combined city-plaza. The Xochimilco Clock being the most prominent point, it’s a common meeting point for visitors and residents alike. Nearly all of the 17 Barrios Originarios of Xochimilco are a short walk from here.

The church and former monastery were declared national monuments in 1932. 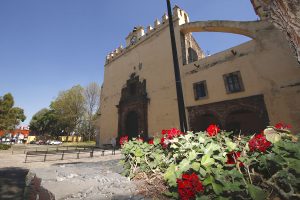 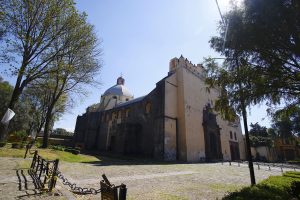 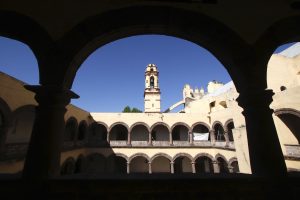 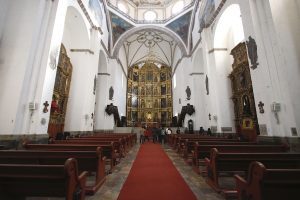 Chapel of the Third Order, Xochimilco

An 18th-century temple at one of Xochimilco's original settlements...

One of 14 original settlements in Xochimilco, this one is home to the UNAM Dept of Art and Design...

One of the most important of the Chinampa Towns in Mexico City's east...

Chapel of the Third Order, Xochimilco

An 18th-century temple at one of Xochimilco's original settlements...

One of 14 original settlements in Xochimilco, this one is home to the UNAM Dept of Art and Design...

Far away little towns like Mixquic in Tlahuac are good for a fascinating visit any time of year.