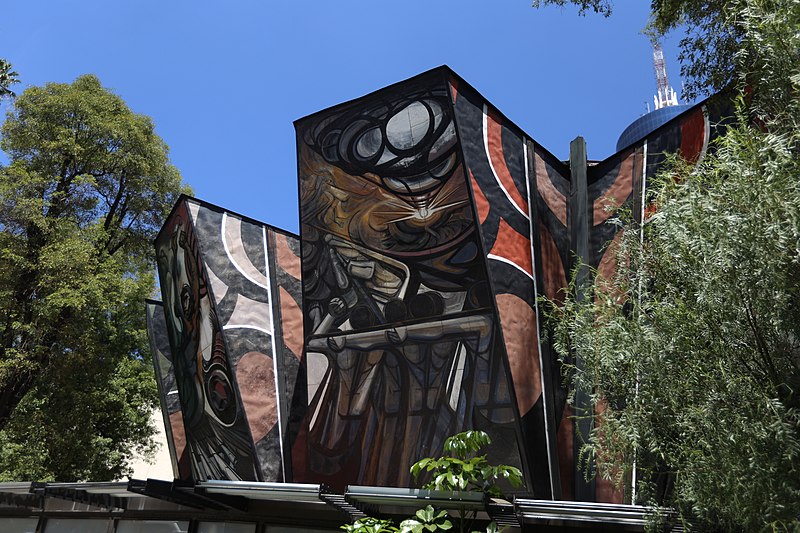 The Polyforum Siqueiros is one of Mexico City’s most photographed buildings. Originally part of the giant World Trade Center complex, today it’s an independent cultural center. It’s unique in its architectural design, but best known for bearing the extensive work of muralist David Alfaro Siqueiros on just about every available surface.

The March of Humanity, (La Marcha de la Humanidad) covers the walls and ceilings of what was originally designed as the Universal Forum. It’s often called the “largest mural in the world.” The work is intended to show the evolution of humanity from the past to the present, and a vision of the future. The “Polyforum Theater,” inside, is circular in the ancient Greek style, and the center hosts frequent art exhibitions and similar events.

The building is believed to have been commissioned as a mural in 1960. But by the middle of the decade, it had been re-planned as not just a painting, but as an entire building too. An international team of architects, engineers, painters, sculptors, and acoustics peoples assembled to complete the project. Experts came from Japan, Italy, Argentina, and likely other countries. Significant political and financial complications involved in the project delayed its final opening until 1971.

Since then, it’s played host to some of the City’s most significant cultural and theater works, including exhibitions and rallies.

The Polyforum Siqueiros often presents a sound and light show featuring a recording Siqueiros himself narrating some of the meaning of the mural. From the inside, the Forum is some 11 meters high. An on-site museum also presents a permanent display of photos, objects, and personal memorabilia from the artist, and from businessman, Manuel Suárez. Suárez contributed much to the centers building and construction. The original models are included to give visitors a better understanding of Polyforum, its construction, and history.

The sculpture on the grounds, of Manuel Suárez with Siqueiros, is by the sculptor, Gabriel Ponzanelli (1942-2019). Ponzanelli is best-known in Mexico City for the sculpture of the Coyotes in the Jardín Centenario in Coyoacán.

Polyforum Metrobús station (Line 1) is just out front of the building.

An important stop for Turibus and Capital Bus, it's more than just that...

Not just a favorite for Sunday bicyclists, the Parque Hundido is a happening city park and a success story.

Always open, it's the very heart of one of Mexico City's favorite neighborhoods.