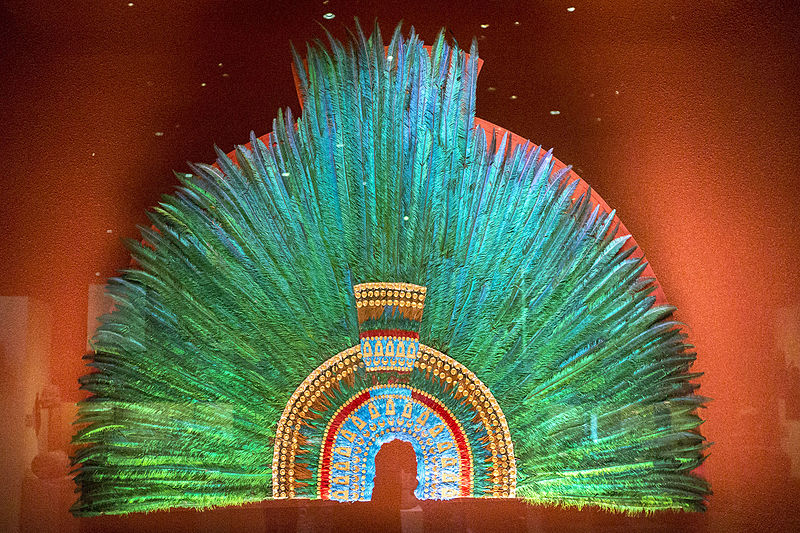 Metro Moctezuma is on Line 1 of the Metro, between the Venustiano Carranza neighborhoods of Moctezuma and Balbuena. It’s not one likely to be visited by loads of international visitors, but for the alt-traveler and the adventurous there are some sites nearby. Most frequently, it’s used as an alternative stop for passengers en route to the TAPO bus station when trying to avoid some of the congestion associated with Metro San Lázaro.

The station is named for the colonia Moctezuma, itself named for the emperor of Tenochtitlan, Moctezuma II (1466-1520). The station logo thus represents the headress which is presently in the Museum of Ethnology in Vienna, Austria. The photograph is of a modern reproduction on display in the station.

With most of Line 1, the station opened in 1969. It’s underneath the important Avenida Ignacio Zaragoza, and the very big intersection with the avenida Emilio Carranza. But don’t thrown off by the neighborhood’s seeming heavy traffic. the neighborhood is changing quickly. The Mario Pani-designed Unidad Kennedy housing development to the south in Jardín Balbuena is just one reason.

The station is also convenient to:

As mentioned, Metro Moctezuma is very much a locals-only, neighborhood Metro station. But like in lots of Mexico City, with a little poking around, the adventurous and the simply fascinated will find the area rewarding.