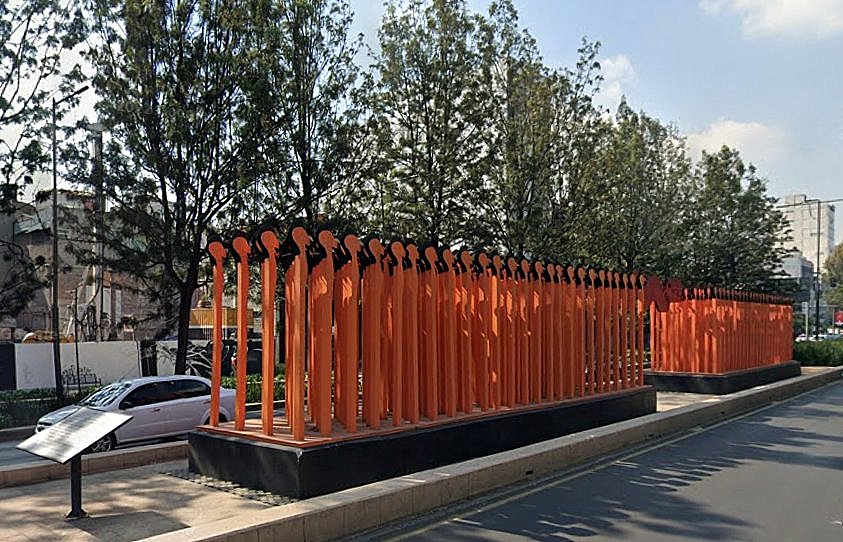 El pueblo del Sol is a public sculpture on Chapultepec Avenue in Mexico City. The 1991 work is by artist, Gilberto Aceves Navarro. The plaque, (visible at left in the photo above), reads:

El pueblo del Sol is a metal relief on a cement pedestal dated 1991. The sculptural group was originally exhibited at the Museum of Contemporary Art in Los Angeles.

It was then permanently integrated into the urban landscape of Mexico City in 1994, on today’s Chapultepec Avenue. In the Nahuatl world this avenue was known as the Octpanti Yoliztl, i.e.; “The Road of Life.” The work evokes the Aztecs as the favorite children of the sun. It points out and warns of the sun’s cyclical appearance in the east, an occasion on which the astrologer or Ilhuicatlamatini would greet the celestial leader, Tonatiuh, the solar deity, by saying:

“The Sun has risen, that which makes the heat, the precious child, the ascendent eagle. How will I follow in its path? How will I make the day?”

A sculptural homage to the indigenous roots of our identity.

Gilberto Aceves Navarro was a painter and sculptor. He later became a professor at the San Carlos Academy. He exhibited his work in more than 200 individual exhibitions during his lifetime, including a 2008 retrospective of his work at the Palacio de Bellas Artes.