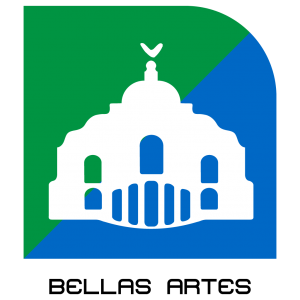 Metro Bellas Artes is one of the Metro stations most likely to be encountered by international visitors. The transfer station for Lines 2 and 8, it’s also important for City residents. A bit more than 50,000 passengers pass through everyday. Just downstairs from the Bellas Artes Palace on the eastern end of the Alameda Central, it’s an important local station too.

The station logo represents a stylized image of the Palace. Though there are four entrances and exits to the station, the most famous is just west of the Palace. This was a gift from the Paris Metro done in the style of the French architect and designer, Hector Guimard. It was presented by French President Jacques Chirac in 1998. The gift was to commemorate 30 years of cooperation between the two Metro systems. In exchange, Mexico City sent a a Wixárika fresco, “El pensamiento y el alma huicholes” by artist Santos de la Torre. That work is displayed in the Palais Royal-Musée du Louvre Metro station in Paris.

As the Metro station for the headquarters of the National Institute of Fine Arts and Literature (INBAL), the station is one of the most lavishly decorated.

The passageway between Lines 2 and 8 is a curated space that annually features installation and, often, multimedia works. The Galería Metro has been described as "the biggest public art gallery in the world." It includes several very long corridors and two staircases. All are used for exhibitions. On Line 2 is a historical display of several reproductions of ancient Mesoamerican art. These have been in place since the Line 2 section opened in 1970. This part of the station also displays Guatemalan artist Rina Lazo's three-panel reproduction of the Bonampak murals. These are in the south-west lobby and the access corridor from the Guimard entrance. Lazo re-worked fragments found in the Maya archaeological zone of Bonampak in Chiapas. The first two panels, when joined,  form a single scene representing a religious ceremony with musicians, priests, nobles, and dancers disguised as animals and fantastic beings. The third panel shows the delivery of a prisoner to a victor in the triumph of the battle. Rina Lazo Wasen was born in Guatemala. Began her studies of plastic arts at the Academy of Fine Arts in Mexico and at La Esmeralda, graduating in 1954. She worked with Diego Rivera on the Hotel del Prado fresco mural, today in the Diego Rivera Mural Museum. Along the Line 8 platforms are mulitple mural works. "Visión de un artista mexicano sobre Francia" (Vision of a Mexican Artist on France) is by Mexican artist, Rodolfo Morales. "Visión de un artista mexicano sobre Francia" (Vision of a French Artist on Mexico) is by French artist Jean Paul Chambas. These works, installed in 1998, formed part of the commemoration between the two Metro systems, too.

One of the most ephemeral of Reforma roundabouts, La Palma is likely to make any list of favorites.