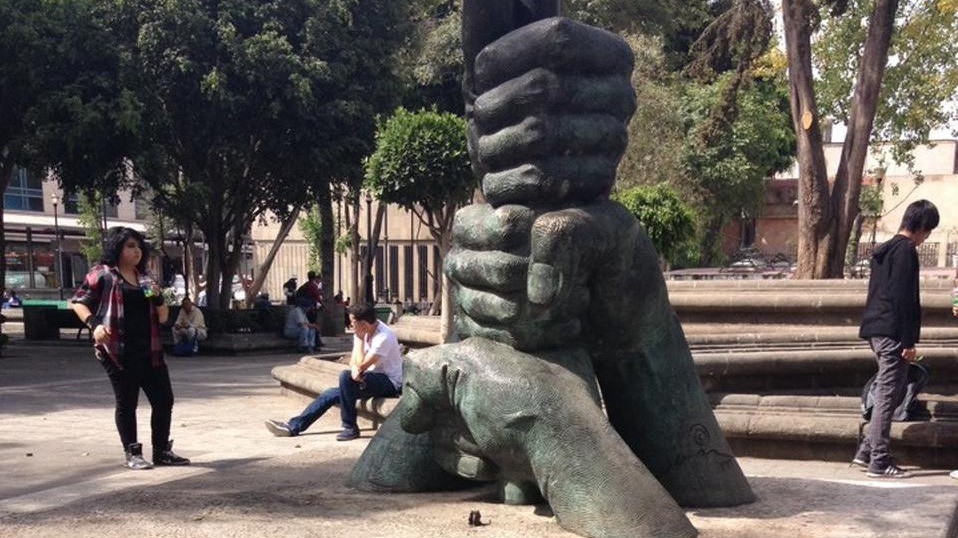 The Plaza de la Solidaridad operates as an addition, just southwest of Alameda Central. In fact, its history is much more recent, and more tragic as well. The square is the site of the Hotel Regis collapse.

The plaza was once part of the San Diego Monastery, today the Alameda Art Laboratory. Much of this land was later subdivided and used for the offices of the newspaper El Imparcial. This, gave way some decades later, to the Regis Hotel. At the beginning of 1908, it was expanded and modernized and this happened several times over the course of its history.

In the 1950s, it was an iconic eight-story building, alongside the seven-story Salinas & Rocha department store that had operated since 1946. The same block also includes the Prado Mission Hotel to make three very prominent businesses. They operated until September 19, 1985 when all three structures collapsed in the earthquake. The entire block saw explosions, fire, and reduction to rubble. Memorables images of the fallen “Hotel ЯHR Regis” sign, which had been on the roof of the hotel, conveyed the scale of destruction to the country.

The remains of 136 deceased were removed from the rubble, but dozens more are believed to have died in the disaster. The ruined site was later expropriated by the City. It became practically a symbol and reminder of the fateful day and the lives lost. Solidarity Square was opened only a year later. In 1991, a monument (pictured above) was dedicated to the spirit of solidarity of the residents and rescuers of México City. It’s still located in the center of the plaza.

At the north of the park, on the west side, is the Diego Rivera Mural Museum. This is now the place of the mural finished in 1947 for the Hotel del Prado. Facing the museum, the park hosts chess enthusiasts from all over the city. On a regular day you’ll see dozens of carefully deliberated matches.

As the sun goes down, most nights we will see contingents of competing sonideros, real DJ’s. The chosen music is more commonly guaracha and cumbia. Stop by to witness some of this. There are no restrictions on who can participate, as long as you can dance. It leaves most witnesses with a reassuring image os the nature of solidarity in Mexico City.