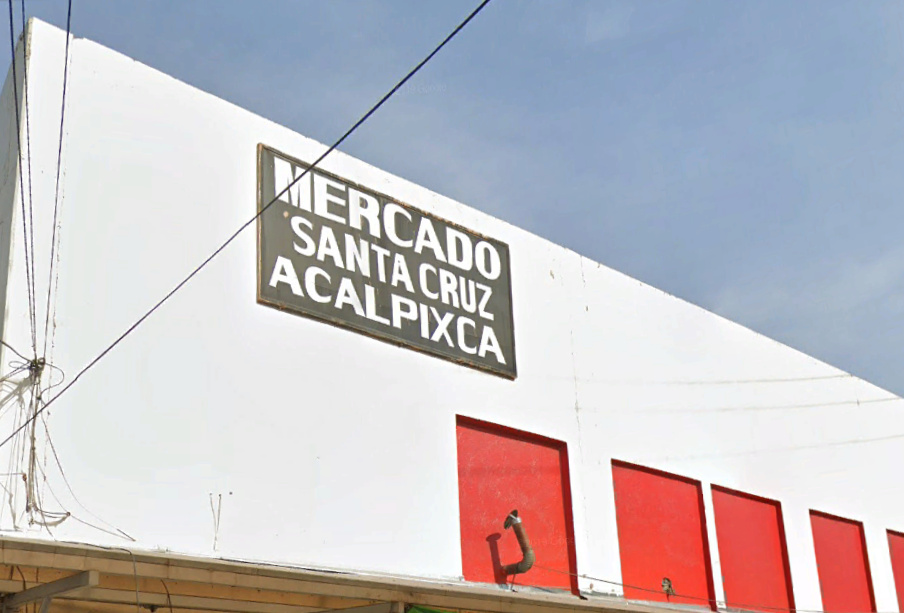 The Mercado de Santa Cruz Acalpixca is the public market in the original settlement of the same name. It’s mid-way on the Avenida Tenochtitlan between the famous Xochimilco Archaeological Museum and the old Lavaderos Publicos. That public laundry, one of just a few remaining in Mexico City, is being slowly converted to a cultural center. It was always an important social meeting point for the community.

Some of those from laundry will show up in the market too. It’s a thriving commercial center for the community amidst Acalpixca’s couple of busy central streets. The market, once or twice weekly, expands to include most of the Plaza Lázaro Cárdenas. This is the former church atrium and most of the central section the Calle Lázaro Cárdenas between the market and the town church.

For those on their way to or from the archaeological zone, the market may seem like a truly special place. Meals are prepared fresh daily – and from the freshest ingredients. And for travelers getting used to too much street food (or worse), it’s a real treat.

You’re supporting smaller and independent businesses and farmers. And you’re eating better too! There are some general tips on market eating here. Remarkable in a whole number of ways, the actual Mercado de Santa Cruz Acalpixca is either the perfect cap to a trip to the town. Or it may be the perfect introduction.

A very old chapel on the hill in Atocpan...

The Cuemanco Boat Launch at Xochimilco Lake is one of the biggest and most publicly accessible trajinera launches in Xochimilco.

The seat of local government, culture, and trade in Milpa Alta

One of the most scenic of Milpa Alta's 12 original villages, Oztotepec is a must visit on any tour of the region.

A beautiful place to start your trip into Milpa Alta...

The youngest of the original towns in Milpa Alta, this one makes up for it with a massive balloon festival.

One of Milpa Alta's furthest-flung pueblos originarios, this one is on the slopes of the Tlaloc Volcano.