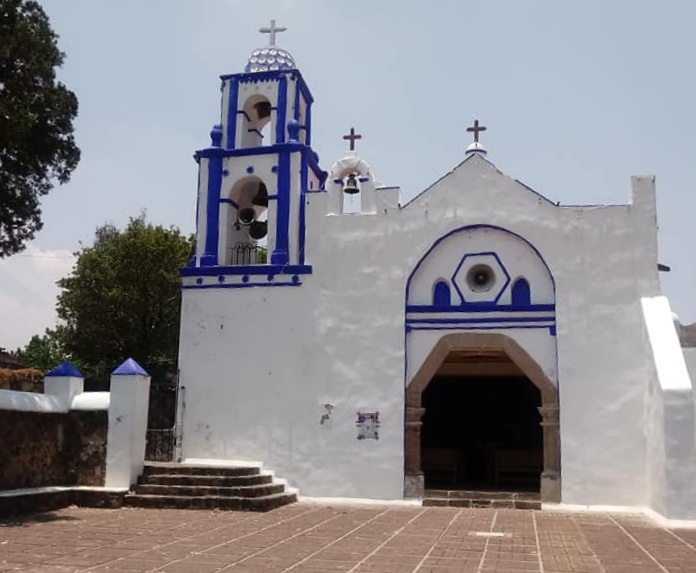 The Chapel of Santa Maria de Guadalupe is located on the east side of the Atocpan cemetery hill, facing east. Little remains of the chapel’s history. It is likely that the Franciscans began working on a hermitage at this site in the late 16th century. Today, the chapel is only open on the 12th of each month.

The jambs of the entrance are characterized by an indigenous carving style. The dome of the tower has Talavera tiles brought from Puebla. But it’s the delicate proportion of the façade that seems to hold the gaze of the modern spectator. The perpendicular buttress does not dissuade many from wanting to take a look further.

Two exterior staircases give access to the choir and the bell tower. The single nave has four bays divided by sash arches. Inside, there are several remarkable works of art that enrich any visit. The interior of the chapel has been remodeled several times over the centuries, but has been very well preserved.

The chapel of Santa Maria de Guadalupe is about a ten minute walk from the Center de San Pedro Atocpan and the main church. It is a striking area. Visitors go up to the cemetery and the Guadalupita chapel just to enjoy the views of the valley. Surely the winding cobblestone streets make it that much more charming.

Sources cited on this page:

The Cuemanco Boat Launch at Xochimilco Lake is one of the biggest and most publicly accessible trajinera launches in Xochimilco.

Among the oldest parts of the City, a reservoir and bath system from deep ancient times.