The La Raza Medical Complex, (Centro Médico Nacional La Raza) is one of the most important hospital complexes in Mexico City. Opened in 1954, it’s administered by the Mexican Institute of Social Security (IMSS). There are many highly specialized units here, including entire hospitals. Some of the procedures offered here are unique to this center. And it’s major research hospital too. 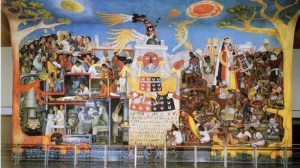 The initial medical center was the work architect, Enrique Yáñez (1908-1990). He went on to be the 20th century’s most prolific designer of hospitals. He set aside the lobby to the auditorium specifically for the Diego Rivera mural.

There are others too. Today the entire neighborhood in Azcapotzalco is called La Raza. It’s the foundational part of the La Raza area.

The “Madonna of the IMSS” appears on all IMSS Facilities nationwide. That work is by Federico Cantú.

A striking historical cultural center and theater, it's one of the City's most photographed landmarks.

The old customs building today shows off some the SEP's extensive art collection.

One of Tlatelolco's oldest continually occupied sites, it's the former seat of the Indigenous Government.

One of the leading museums of art in the country, the SHCP resulted just from tax payments - in art!