The Church of San Lorenzo Diácono y Mártir is probably most famous for the Mathias Goeritz-designed stained-glass windows in the dome and in the rest of the church. It’s also well-known today for the church’s dedication to workers, and especially with helping people to find jobs. The building we see today dates from the 17th century and was remodeled at the end of the 18th. It’s all part of a convent founded in 1598, part of the Order of San Jerónimo (Hieronymites).

An older church on the site was damaged during the floods and had to be torn down. This newer structure was built between 1643 and 1650 by the architect Juan Gómez de Trasmonte. It was seriously remodeled at least twice thereafter. And an original bell tower collapsed either after an earthquake in 1845, or after being struck by lightening in 1871 (several sources conflict here).

The Reform Laws, when enforced in 1865, forced the Jerónimas nuns to abandon the entire convent. In 1867, President Benito Juárez created a National School of Arts and Crafts for Men and the school took up residence in the cloister of the convent. By the 1930s, the cloister was remodeled to expand and adapt for the engineering school that came to replace the earlier arts and crafts school. That convent building was demolished after damage from the 1985 earthquake.

The church then burned in 1940. In 1954, an exiled Basque priest began a major, and rather famous reconstruction with architects Ricardo de Robina and Jaime Ortiz Monasterio. Together they invited sculptor Mathias Goeritz to participate. The results have been celebrated ever since as a unique combination of minimalist contemporary art and colonial architecture.

A relief entitled “The Hand of God” in the apse, is also by Goeritz. The stained glass windows recall not just minimalism but the High Modernism and Abstraction of post-war painting. They were made at the made Carretones Glass Factory in the Merced neighborhood just across the city center. 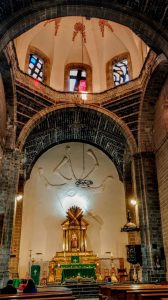 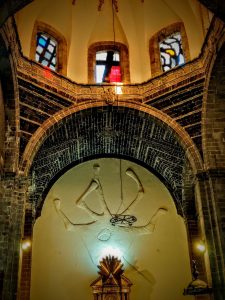 The temple has a single nave and, unlike most of churches in convents, has just one entrance facade. The facade is a strange mixture of both Baroque with Neo-Classical columns and other elements. A sculpture of Augustine of Hippo is central above the main door. A relief of the annunciation on the upper choir parapet stands out for its great quality, as does the vault of the lower choir, in an enormous shell pattern. The main altar dates from the 18th century, as does the carved wood pulpit.

Many churches in Central Mexico have confused (or combined?) their particular Saint Lawrence over time. This San Lorenzo was a third-century Deacon of Rome who was Martyred during the legendary persecutions of Christians. He’s also the one to whom most Mexican churches were originally dedicated. This includes the arguably more famous churches of San Lorenzo Tezonco, and the strikingly beautiful church in Huipulco, Tlalpan. The number of places, things, and institutions dedicated to this St. Lawrence, is of course, tremendous.

Mexican churches today often seem to have their original patronages combined with that of Saint Lorenzo Ruiz. Ruiz was only beatified in 1981 by Pope John Paul II. A Chinese-Philipino, Ruiz was executed in Japan during a 17th-century persecution of Japanese Christians. This occurred during the period of the Spanish evangelization of the Philippine Islands. He’s also famously remembered for having been the first canonization outside of the Vatican, not coincidentally, in Manila.

A grand 16th-century school lives on as an events venue and historic monument...