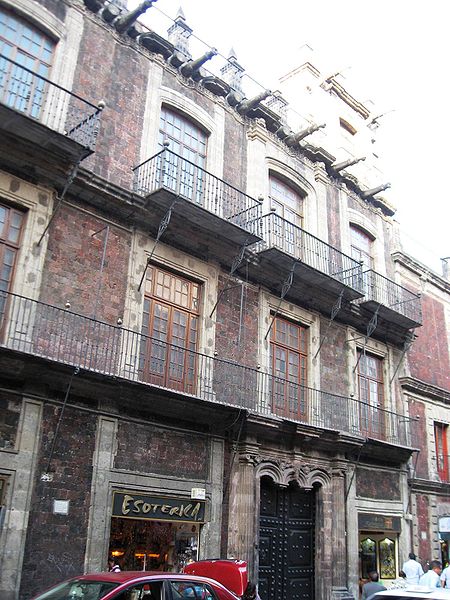 The Casa del Conde de la Torre de Cossío is widely recognized as a prime example of 18th century residential architecture in the Center of Mexico City. Literally the house of the Counts of Torre Cosío y de la Cortina, it was the home of Juan Manuel González de Cossío y de la Herrán. He was granted the title, by royal decree from Carlos III, in 1773. He was recognized as the Lord of the Torre de Cossío, in the municipality of Rionansa, (Cantabria), Spain with the same decree. The house is sometimes also referred to as the Casa de la Cortina, for José Justo Gómez de la Cortina. He was an important social and political figure in the waning years of New Spain.

A plaque on the building recounts the following tale. The house is said to have been built on property once owned by a Juan Manuel Solorzáno. Solorzáno suspected his wife of infidelity although everyone he knew insisted she was chaste. Solorzáno is said to have called upon the devil himself. The dark lord recommended that Solorzáno kill the first man passing by his house, each night after 11 p.m. Solorzáno took the devil up on the offer, but prior to killing his victims, he would ask him the time. He’d then say: “Blessed is he who knows the hour of his death.” He killed several people before finally repenting. Seeking out a priest, his penance was to pray for three consecutive nights at the gallows. At dawn, after his  third night, he was found hanged.

Needless to say, it’s one of the most haunted places in Mexico City.

The structure which followed was completed in 1781. The façade contains a number of notable features. A tile-covered turret tops a tower of decorative bastions reminiscent of the sixteenth century. There are also barrel-shaped rain spouts. The façade is clad in tezontle, and the window and door frames are in quarried chiluca stone. The main doorway is flanked by a dramatic carved stone arch. The decorative metal bolts are original and were a sign of status and wealth from the 17th century.  Nothing of the interior has survived and the ground floor has been adapted for commercial use.

Among the Palaces of the City Center, the Casa del Conde de la Torre de Cossío not the best known. And other than the retail spaces on the ground the floor, it’s not open to the public. Nevertheless, the houses story and rich appearance are part of what make a walk around the City Center so enticing.

Palace of the Count of Xala (Sanborns)

Palace of the Count of Xala (Sanborns)