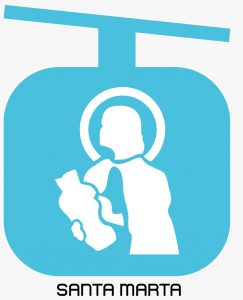 The Santa Marta Cablebús is the easternmost in Mexico City. It’s the beginning of a cable car journey for some international travelers arriving from Metro Santa Marta on Line A of the Metro.  The connection between the Metro and the cable car is quite easy, and the views beyond are outstanding. The cable car continues, just north of the Sierra de Santa Catarina chain of volcanoes, across southeastern Iztapalapa. It’s a whole new experience of Mexico City, and just since August of 2021 when the laine officially opened.

The station is named for Santa Martha Acatitla, one of the 15 original settlements of Iztapalapa. But Santa Martha also frequently represents the entirety of the east of Mexico City. Settled only very recently, visitors will get views of many of these neighborhoods. From the next station, at San Miguel Teotongo, views continue across the eastern Valley of Mexico.

Visible in the photo, and from the Santa Marta Cablebús station, is the new Teotongo Utopia. The Utopia parks in Iztapalapa bring residents together for classes, workshops, and sports. The airplane in the photo is used as the site library.  Five of the parks have opened and five more are being developed.

Remember, to ride the Cablebús, you’ll need seven pesos on your Metro Card. Be aware of rush hours when service will be much more crowded. But for sight-seeing trips during the day, there are few more attractive options.

The neighborhood on the slopes of the famous Cerro de la Tortuga...

Santa Martha's start to a journey across southeastern Iztapalapa...