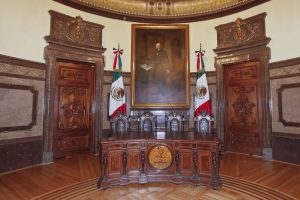 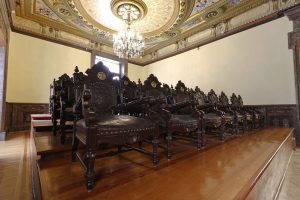 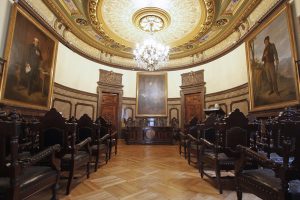 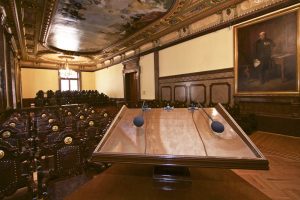 The Museo de los Cabildos is one of two good reasons to get inside the Antiguo Palacio del Ayuntamiento. The other is the Ágora Gallery on the second floor. Both give you a chance to glimpse the interior of Mexico City’s main government building. But here, we get a chance to really experience just how old that government is.

Cabildos is usually translated as Council, as in City Council. The Salón de Cabildos we’re looking at here opened on June 27, 1721. The Museum includes this salon, and the Hall of the Viceroys. They began to be hung here with the 1721 opening of the salon. The two halls that once housed the city council archives today display portraits of the 62 viceroys of New Spain. They begin with Antonio de Mendoza y Pacheco and continue through to the independence period.

The building itself was begun in the 16th century as the Casas Nuevas del Consejo, (the New Council Houses). A first city government meeting was held here on May 10, 1532. But those buildings were mostly lost to the flood of 1629. A major riot in 1692 then burnt most of the Viceregal Palace, today’s National Palace, and this, the City Hall. Some remnants of the older structures still exist in the foundations here.

The allegory of the history of the country painted along the tops of the walls dates from the late 19th century. One can follow the history from the fall of Tenochtitlan through to the Porfirato. Most of the interior decoration was designed in 1893 by the architect and engineer, Manuel Gorozpe. He did most of the truly spectacular renovation work of the building at the same time. His own home is today the Casa de Cultura de Tabasco in the Colonia Juarez.

A glimpse into the lives of the Revolutionary Zapatista Army, there's a museum in Milpa Alta that's not to be missed.