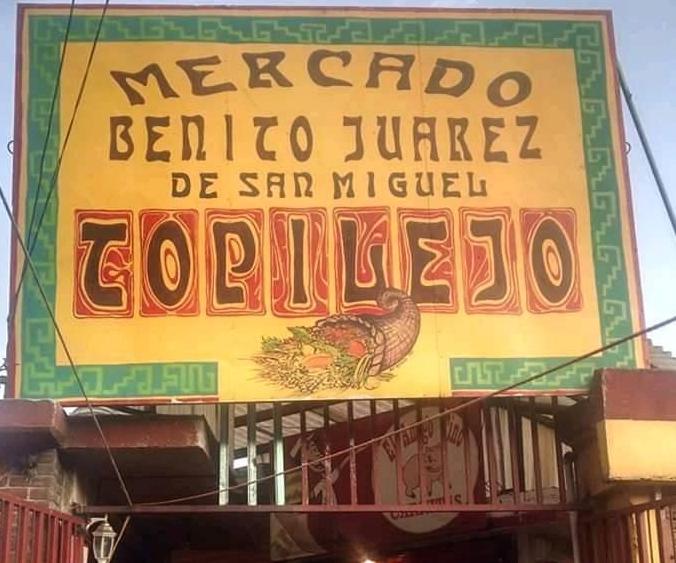 The Mercado Benito Juárez de San Miguel Topilejo, or simply the Mercado de Topilejo, is just south of the fantastic atrium of the the San Miguel church. In fact, the relative chaos of the market may historically explain the survival of the giant atrium.

It’s one of the least formal of the many public markets markets in Mexico City. It probably much more resembles a traditional tianguis, that is, a street market, rather than with the giant enclosed building you’ll find in other small towns in Tlalpan. And like many of those markets, this one can’t help but spread into the surrounding streets, and around the front of the church atrium onto the Calle Morelos, and south along the alleyways.

But sadly, the market here is also a remembrance of the 1985 earthquakes. The first corn festival had been carefully planned for September 20th of that year. The disaster of the earthquake quashed the plans entirely and all the food had to be distributed among the organizers and neighbors.

Since then, the festival goes off every year in preparation for the Feast of San Miguel Arcángel on September 29. That festival is usually celebrated with traditional dancing, muleteers, chinelos, musical bands and more. The Ejidal Auditorium, about a 20-minute walk to the west side of the town, also plays host to much of the festival.

Don’t shrink away from the stretched tarpaulins and the smoking comals. There are some wonderful places to eat, and as will appear obvious, plenty of the freshest foods imaginable. It’s a ruddy, living, breathing community, and one you’ll be happy to find yourself in. The fact that it dates all the way back to the seventh century CE may just make the tamales and elotes in the Mercado de Topilejo that much better.

For those arriving from the Cuernavaca Railroad Bikeway, the market and the center of the town, are just about 15 minutes away.

An all-but-forgotten monument to the Tepaneca people in Ajusco...

One of Mexico City grandest of national parks, Ajusco has something for everyone.

A homey little town on your way to the park, this Ajusco may be the most classic pueblito in Mexico City.

An all-but-forgotten monument to the Tepaneca people in Ajusco...

One of Mexico City grandest of national parks, Ajusco has something for everyone.

Everything you could want in a small town market, but fresher, healthier, and ready to eat.