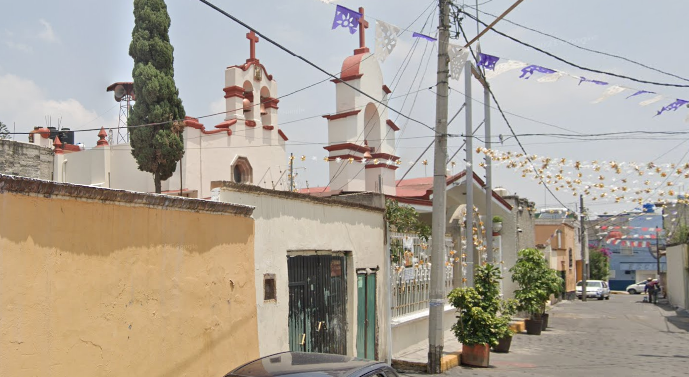 The Barrio San Pedro is one of the eight traditional neighborhoods that make up the Historic Center of Iztapalapa. Once a part of the half-town of Axomulco, all of them later became the neighborhoods of the colonial town of Iztapalapa de Cuitlahuac. Only partly delineated during that period, the neighborhoods really came into their own only during the Independence Period of the 19th Century.

And like the north of this area, San Pedro was a chinampa farming area until into the 20th century. Streets used to be canals and connecting footpaths. As such, many of them are as crooked as anything in Venice. Brightly painted streets, murals and walls are the general rule.

The chapel on Primavera Street was begun only in 1945. Finished some ten years later, it likely replaced an open-air chapel. The sacristy was built only in 1985. But it’s still one of the most charming of the multiple chapels in the Center. A combined indoor-outdoor feel actually retains a bit of its long open-air history. It was long but a mere visiting chapel of the Parish of San Lucas.  It’s about a ten-minute walk, so perhaps such visits were frequent.

Today’s Barrio San Pedro is a prominent participant in the Semana Santa observations leading up to Easter Sunday. These are world-famous and include tremendous processions and passions plays that culminate, as they have for more than 150 years, on the Cerro de Estrella.

A neighborhood cultural and arts center that started as they all should...

One of eight traditional neighborhoods in the the Center of Iztapalapa

Historical Archive and Repository for all Iztapalapa...

One of the eight historic neighborhoods of central Iztapalapa

A fantastically colorful trip into the Iztapalapa Historic Center...

A neighborhood cultural and arts center that started as they all should...

One of eight traditional neighborhoods in the the Center of Iztapalapa

Historical Archive and Repository for all Iztapalapa...