The Iztapalapa Historic Center is among the oldest parts of Mexico City. Today it's recognized as eight original barrios, or neighborhoods. These are among the most densely populated. But they follow many of the same routes as the old canal channels that criss-crossed the region. The result is a colorful, twisting turning neighborhood of whimsy and charm.

Easily walkable, the center only starts with the Cuitlahuac Macroplaza. It extends from there in every direction. And though it's much newer than truly ancient Culhuacan (which is nearby), the two communities share roots on the slopes of the towering Cerro de la Estrella.

These roots come to bear on the world famous Semana Santa celebrations. But especially here in the Ocho Barrios, the eight original neighborhoods. Together they could be considered one of, or at least the equal of, the other 15 Original Settlements of Iztapalapa. Indeed during the ancient period the eight neighborhoods were parts of two half-towns called Atlalilco (to the west) and Axomulco, (to the east). Later they became one colonial era city, Iztapalapa de Cuitlahuac. Even then, they were named to honor the final Lord of the territory: Cuitlahuac II. 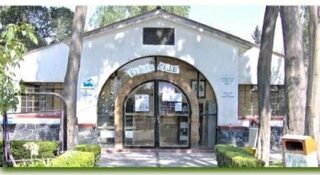