The Santa Anita Church is the parish church of Santa Anita Zacatlamanco Huehuetl in the Iztacalco. The neighborhood is still called Santa Anita for this old parish. The church dates from the mid-18th century. It’s well-known for the outstanding collection of art and for the Churrigueresque of the façade.

Zacatlamanco was among the last places where the Mexica people stayed when searching for Tenochtitlan. The Xólotl codex holds that also stayed briefly in what’s today the Historic Center of Iztacalco, and in Mixiuhca. This, along with the church, explains why the neighborhood is today one of Mexico City’s Original Settlements (Pueblos Originarios), the only one in Iztacalco.

The Franciscans dedicated their early chapel here to Saint Anne of Nazareth. It appears already in 1554. It was a visiting chapel, meaning part of the parish of San José de los Naturales until 1771. After that year it became part of the Parish of San Matías Ixtacalco.

By 1777, the church was in bad shape. The magnificent façade was added in a renovation that also added the remarkable altarpiece. Made of wood, a corn-paste sculpture of Santa Ana in the center dates from the 16th century. The altarpiece contains four paintings in addition to that of the Virgin of Guadalupe. These are portraits of the four Doctor Ecclesiae Universalis: Gregory the Great, Augustine of Hippo, St. Jerome, and Ambrose of Milan. The six reliefs depict four evangelists, and the archangels Gabriel and Raphael.

It’s one of the best preserved 18th-century altarpieces in Mexico City. The church collection includes eight more paintings and 13 sculptures. These are all catalogued by INAH.

Among the other great Baroque chapels of Iztacalco, the Santa Anita Church is one of the highlights. Less than five-minutes walk from the Santa Anita Metro, it’s also remarkable for the largely intact atrium. Of course, the surrounding town has all of the charm one expects from the Pueblos Originarios. 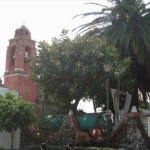 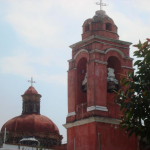 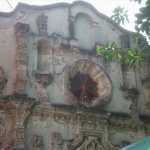 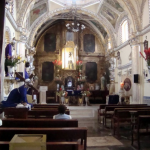 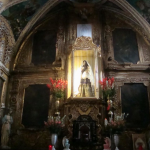 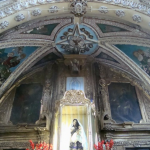