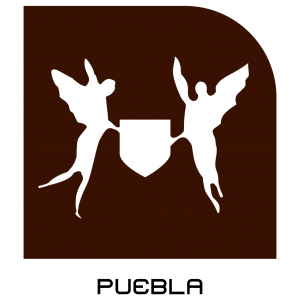 Metro Puebla is the last of the great Brutalist stations along Metro line 9 in the east of the City. It receives a fair amount of traffic from passengers hoping to avoid morning and evening rush-hours at Metro Pantitlán. Nevertheless, it’s not one of the busier stations in the system. Non-local traffic, that not headed to the Puebla neighborhood for which the station is named, will be headed for the Ciudad Deportivo to the immediate south of the station.

Metro Puebla is especially useful for arriving to the Alfredo Harp Helú Baseball Stadium. It’s just a few minutes walk south. Some of the seating for events at the Hermanos Rodriguez Race Track may also be better served by this Metro.

The station logo depicts the coat of arms of the city and state of Puebla. The neighborhood just north of the station was named to commemorate the state and its capital city. The nearby Avenida Zaragoza turns into the highway to Puebla just a few kilometers to the south and east of here.

Deep, dark, and vaguely authoritarian-feeling, it's the other Metro in Condesa and up top it's just as lovely.

Metro Chilpancingo is the first stop for lots of visitors, and lucky them. It's a good one to start out from.

Among those most frequently visited by international visitors in the City, it's a super important transfer station.

On line 9 at the southern edge of Cuauhtémoc, it's a surprisingly useful station.