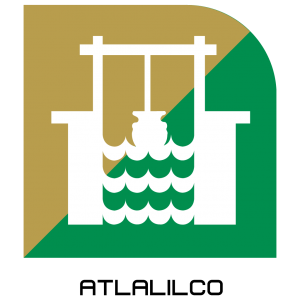 Metro Atlalilco is a transfer station that might well take up two entries here. The distance between the two platforms is that great. At 800 meters, it’s the longest transfer walk within the Metro. This resulted from the cancellation of a planned station between the two stations during the construction of Line 12 in the 2000s.

The station logo depicts a well. The Nahuatl meaning of the town name, “Atlalilco,” is simply “where water is contained.” Atlalilco was the western half of the ancient town of Iztapalapa. Eight old neighborhoods divided the town into two halves. Axomulco, the twin half, is today most of the Historic Center of Iztapalapa just to the east. Atlalilco was the half-town to the west. Today’s Barrio de Santa Barbara corresponds to most of that half-town.

Nearly all of that transfer walk, beneath the two Metro Atlalilco platforms, is in the Colonia Santa Isabel Industrial.  But the station also serves the neighborhoods of Ricardo Flores Magon Amp, Los Cipreses, and especially the Barrio de Santa Barbara to the immediate north. The oldest neighborhoods in Iztapalapa, these Barrios Originarios are often worth a visit.

The photo above is of the fountain at the street level above the Line 8 station. This is on the median plaza between the east- and west bound lanes of the Calzada Ermita-Iztapalapa. Line 12 exits are on either side of Avenida Tláhuac.