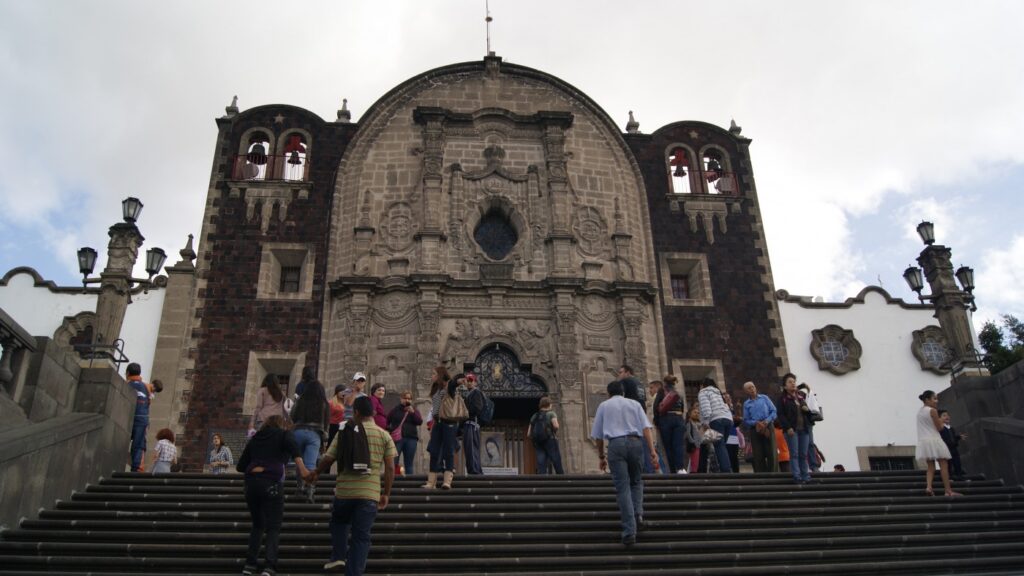 The Chapel on a Hill

The Capilla del Cerrito de los Angeles (literally the Chapel of the Little Hill of the Angels) dates from 1666 although the present building was begun in 1740. It’s sometimes also called the Chapel of Tepeyac Hill.

On December 9, 1531, Mexican tradition holds that the Virgin of Guadalupe first appeared to Juan Diego Cuauhtlatoatzin. This Chapel is said to mark the exact location of the apparition and the parish church, it’s most strongly associated with the “miracle of the fresh flowers,” the first apparition said to have happened here. The “little hill” of the name is possibly a bit of a challenge for some climbers, as it’s not in fact that little.

The chapel already built on the Tepeyac hill in 1666 survived some 120 years but in the end needed to be replaced by something more substantial, including a chaplain’s house next door. Today, it’s beloved for the frescoes by muralist  Fernando Leal, who tells the story of the apparitions. Four marble angels from sculptor Ernesto Tamariz and a Cross of the apostle were placed in 1895. From the terrace you can enjoy the view of the city.

Between 1945 and 1950, the Capilla del Cerrito was rebuilt to include a small square with four sculptures of the archangels Miguel, Rafael, Gabriel and Uriel.

The Tepeyac Hill is something of a foothill to the larger Cerro de Guerrero just to the north. A national park in its own right, it can offer something of a natural respite as the park continues to be expanded as a nature reserve.

Museum of the Basilica of Guadalupe

One of the most well preserved of the city's old aqueducts, the Guadalupe still stretches back into time.

Museum of the Basilica of Guadalupe

One of the busiest places in the Villa de Guadalupe, the Basilica Baptistry is a curious spiral-shaped building.