The Edificio Basurto is one of the most celebrated art decó apartment buildings in La Condesa, and perhaps in all of Mexico City. The 14-storey building is probably the most important early work of Francisco J. Serrano. He’d go on to design the INBAL recognized churches of Guadalupe in San Rafael, the San Cayetano in Lindavista, and the ever-popular Pasaje Polanco.

Here, Serrano create a cross-based plan that maximizes natural sunlight and city views. His work mixes straight lines with curves such that one might think they’re the first we’ve ever seen. The visual impact sets a tone for the entire neighborhood. 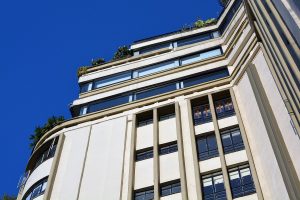 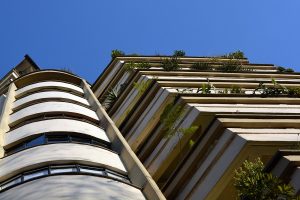 Built between 1940 and 1945, the building is just a half-block north of the Parque México. The building is named for the landowner who developed the property. Serrano’s plan was to take advantage of the irregular parcel of land and give occupants views to the northeast, northwest, southeast and southwest. Each floor has four well-apportioned apartments, with a few commercial spaces on the second floor. Lucky insiders can snap pics of the helicoidal staircase in the center. Few others will be built like it.

The Edificio Basurto has also been called post-art deco in style. But it’s quintessential Condesa. And a treasure even just to view from the outside.