Cuepopan and Colonia Guerrero take up most of the historical territory at the eastern end of the Mexico-Tacuba Causeway. Especially surrounding the Santa Maria la Redonda church, it was the northwestern quadrant of the old island capital of Tenochtitlan.

As a strategic location, it was often the site of conflict. The long rivalry between the Tepaneca people of Azcapotzalco ended only with the formation of the Triple Alliance in 1427. Prior to that, Cuepopan was precisely where many of the conflicts came into the open. 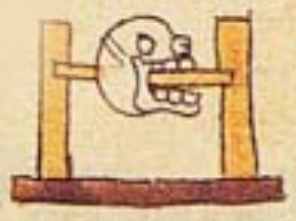 The symbol for the Cuepopan and Colonia Guerrero Walking Route is a glyph adapted from the 1541 Codex Mendoza. It recalls the neighborhood's reputation as a place of battle and open conflict.

A designated "colonia" by the late-19th century, that's when most of what we see today was built. By the early 20th century, the Colonia Guerrero was known as the city's center for nightlife and dancing. In fact, it's largely held onto that reputation even to this day.

Cuepopan and Colonia Guerrero declined during the latter half of the 20th century. But there's no question that it's been experiencing a true re-birth in the past few decades. Dance halls have reopened (some never closed). And with mighty and mature trees, it's a shady and fascinating place to walk. The sites below can all be visited in an afternoon.