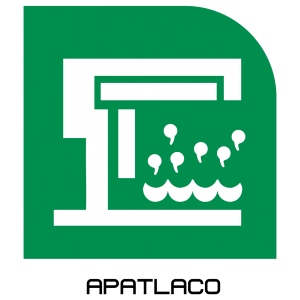 Metro Apatlaco, on Line 8 of the Mexico City Metro, is directly southeast of the neighborhood of the same name. The Nahuatl name means “place of medicinal baths,” and the station logo depicts a glyph that shows the same thing.

The ancient place-name came to be applied to a canal that was secondary to those surrounding Iztacalco, directly north of here. The principle canal was of course the famous La Viga canal.

Apatlaco was another of the ancient island communities, like Nextipac, Aculco, Tetepilco, and Atlazolpa. They were populated after the settlement of Culhuacan. But when you consider that the Cualhuacan area was settled in about 800 CE, it’s a very long time prior to the founding of Tenochtitlan.

You can see the ancient islands on the 1521 map of ancient Tenochtitlan. La Nueva Rosita is the neighborhood to the east of the station.  It’s much younger, though. All of these ancient communities later thrived along the banks of the La Viga canal that was a major thoroughfare until the end of the 19th century.

The station is the northernmost in Iztapalapa. It’s just about a 6-minute walk from the Magdalena Atlazolpa church. The Mercado Sifón is even closer.

As the house-Metro for the City's most important cultural organization, it's a Metro loaded with art!

On Eje Central, one of the Centro Historico's most aptly placed stations.

South in the City Center, the Metro station named for one of the City's oldest fountains, it's also a great place to eat.