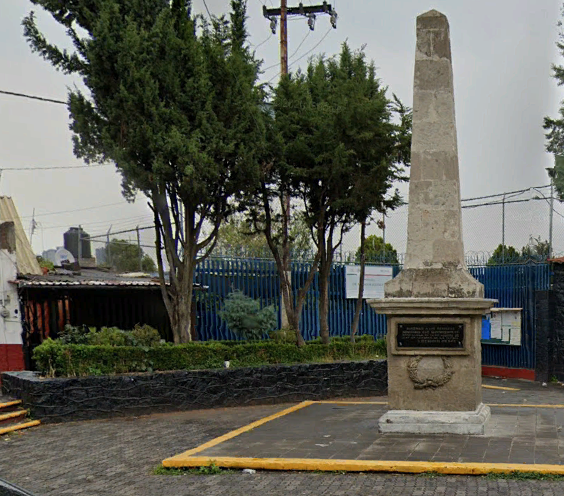 The Padierna Obelisk is a public monument erected in 1907. It serves as a tribute to the soldiers who fell at the Battle of Padierna, more often referred to as the Battle of Contreras in English. That English name may give you a better idea of where the fighting took place. It was not far from here.

On August 19, 1847 the armies of the USA and Mexico met just to the south in a two-day defense of Mexico City. The USA troops were marching from Puebla, and stopped here by Mexican General Gabriel Valencia. Today, the name “Padierna” covers a good half dozen different neighborhoods in the area. Winfield Scott later estimated Mexican casualties here, combined with those at Churubusco, at 4,297 killed and wounded, and 2,637 prisoners. These were the first incursions on the USA army’s drive to Mexico City.

The obelisk faces one of Ariosto Otero Reyes‘ murals, this one dealing with the 1848 Treaty of Guadalupe Hidalgo which finally ended the war. The Padierna Obelisk is in the middle of San Jeronimo Aculco, the lower and less posh side of Aculco-Lidice. Both parts are loaded with historical and cultural curiosities. Not least among these is the Tihuatlán Market. The market’s about a 5-minute walk north of the monument.